Do something delicious with all that duck meat

Hunker Down: To squat down low and get ready to face the inevitable (such as quarterly tax returns), the long-awaited (such as that winter snow storm), or the hoped-for (such as the arrival of that flock of mallards before the end of duck season). Think Seal Team 6 and Osama Bin Laden.

RECIPES OF THE WEEK

The Mississippi-Arkansas-Louisiana Delta is a fabulous waterway resource for lovers of goose, duck, Muscovy, and other waterfowl. Migrating and wintering waterfowl settle in the region every year between late autumn and mid-winter. They favor the many wetlands, rivers, lakes and tributaries that run throughout our region, and they love the grains left in farm fields, such as corn, millet and rice.

The current duck and Muscovy hunting season ends January 27 in Mississippi. I’ve been told it’s been a pretty good year.

Some of us are still fortunate to have duck hunters in the family to provide for our beloved Southern duck gumbo, duck dressing, fried duck, duck confit, roasted duck with pecan dressing, and duck salad. The rest of us are stuck buying frozen duck parts at the grocery store, or paying $21.95 per pound for fresh skin-on domestic duck breast at the local meat market. The Old Bride’s brother has pointed out that wild duck costs about $1,400 per pound, after a hunter computes the costs for weapons and ammunition, licenses, gear, clothes, dogs, and duck camps.

At any rate, however one obtains the duck, one has a plethora of options for transforming the duck into one of our many favorite special dishes. There are simple rules to follow for cooking duck in any fashion.

Domestic duck will be fattier than wild duck. Whichever version you get, embrace the fat, which is what renders the meat succulent in cooking.

Leave the skin on because this contains the fat that will render the meat tender.

Clean the bird if wild, and remove pinfeathers and buckshot pellets as well as possible.

Note that some types of wild duck are gamier than others, and some such as Mergansers, taste fishier (teals and Mallards are less gamey).

To prep for cooking in any fashion, season with salt and refrigerate for several hours (brine a whole bird in salt water or simply dusted with salt).

Remove from fridge and allow to reach room temperature for a minimum of 30 minutes before cooking.

Whatever recipe you wish to follow, don’t over-fuss with the bird… the meat should be allowed to shine on its own.

Cousin Rita from Little Rock came down for the MLK holiday this past weekend, and we experimented with duck sauces. We came up with two recipes for skin-on duck breast: An easy Orange Sauce, and a Honey-Balsamic Sauce. The former is based on the classic Duck a la’Orange, and the other has a slightly Asian flare. We ended up glazing fresh roasted beets with the orange sauce, but it didn’t matter because we comingled the duck with the beets when we plated the dishes.

3 Honeybell oranges (or other sweet, seedless variety), peeled and segmented, with the juice

Melt butter on medium heat. Add sugar, stirring, until sugar begins to bubble. Stir in the oranges with juice and zest. Bring to a boil, stirring to prevent burning until mixture begins to thicken. Add cognac and reduce to low heat for 2-3 minutes. Remove from heat. Use on roasted beets or seared duck breasts (or buttermilk cake and vanilla ice cream!).

2 to 3 T balsamic vinegar, to taste

Sauté the shallots and garlic in olive oil. Whisk in orange juice, honey, balsamic, ginger and salt. Simmer on medium-low until mixture reduces and thickens. Stir in orange zest and cayenne pepper. Immediately cover and turn off heat. Reserve sauce to use with duck breasts. 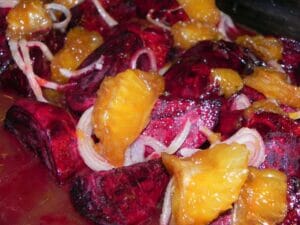 Peel the fresh beets. Slice in half and coat in olive oil. Sprinkle all over with kosher salt. Place cut-side down on 9-by-13-inch pan smeared lightly with olive oil. Spread the onions evenly over the beets. Cover loosely with foil to encourage even cooking of the beets. Place in oven preheated to 350˚F. Bake for 20 minutes. Remove pan from oven and place on insulated surface. Ladle orange sauce evenly over the beets; it will coat bottom of the pan. Return to oven and bake additional 20-25 minutes while preparing the seared duck. Check the beets while cooking; be sure to remove before the sauce caramelizes. (It will begin to darken around pan edges.) 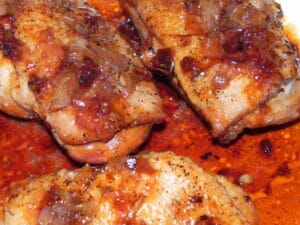 The skin will be on one side only of the duck breasts. Score the skin by using sharp paring knife and cutting at a diagonal down almost to the meat but not into the meat. This is to allow the fat to drip into the pan juices. Season breasts liberally on all sides with sea salt and black pepper. Refrigerate at least 1 hour to allow the salt to be absorbed into the duck. Remove from fridge and bring up to room temperature (about 30 minutes).

Heat olive oil in large skillet on medium-high heat. Add duck breasts, skin-side down. Cook for 8 to 10 minutes until skin starts to become crispy brown, and duck starts to cook around edges. Turn once, and sear skinless side for about 3 to 5 minutes. At this stage, some foodies might prefer to remove the breasts and slice for plating with sauce of choice drizzled over the slices. The meat at this stage will be cooked to medium rare or medium (still red or pink in the middle).

To cook completely (considered sacrilege by some duck connoisseurs), drain excess grease from pan. Spoon all of the Honey Balsamic (or Orange) Sauce over the breasts. Bring to a boil, cover tightly, and turn off heat. Allow to rest, covered, about 5 minutes before plating.