The Hunt Breakfast at Rowan Oak 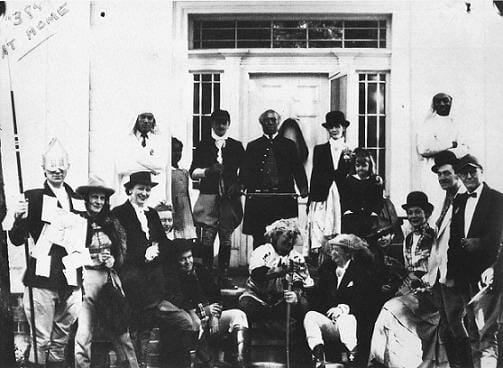 Early on Sunday morning, May 8, 1938, William Faulkner telephoned his friend J. R. Cofield to come to Rowan Oak to take some pictures. Faulkner and his friends Ross Brown and Colonel Hugh Evans had brought home venison and quail from a hunt and had decided to hold a hunt breakfast. No one would be allowed to attend unless mounted and dressed. Resplendent in polished boots, fawn-colored breeches, ruffled shirt and velvet jacket, gray gloves and huntsman’s cap, Faulkner greeted his guest with a short blast at the hunting horn around his neck and served them straight bourbon in shot glasses.

“Colonel” Cofield recalled, “Bill’s butler had his standing order to serve shots of ‘Old Forester’ every 15 minutes or so. “I had to beg off after a couple of jiggers. I told Bill to make his man pass me up –– I was starting to see two of everything.

It’s hard to see but my Grandfather Cofield wrote ’38 at home’ in the top left corner of the negative.