Sock it To Me! Valentine’s Burlesque Show 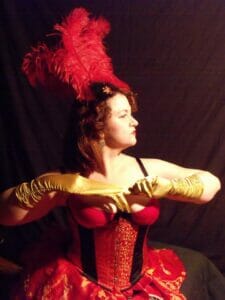 Cupid comes early to Oxford as the annual Valentine’s Burlesque show hits the boards, as they say in show business, at the Powerhouse Community Arts Center on Saturday, February 9 for two shows, at 6 p.m. and 9 p.m. The annual event was launched by a local burlesque troupe three years ago and has grown in popularity each year. It seeks to capture the golden age of burlesque, creating a show that is a mix of vaudeville a little extra shake and shimmy.

Burlesque origins were intended to make people laugh through caricature or ludicrous treatment of a more serious work. The art form became popular in the United States in the early 1900s as a style of cabaret show that featured bawdy comedy and tantalizing performances by female dancers. It was this era that inspired films, such as 1972s Cabaret. A resurgence of interest in this era of burlesque has become popular with performers hosting show in bars, theatres, and professional troupes touring.

Tickets to the show are $10 and may be ordered online at www.oxfordarts.com