William Faulkner and the Mule Picture 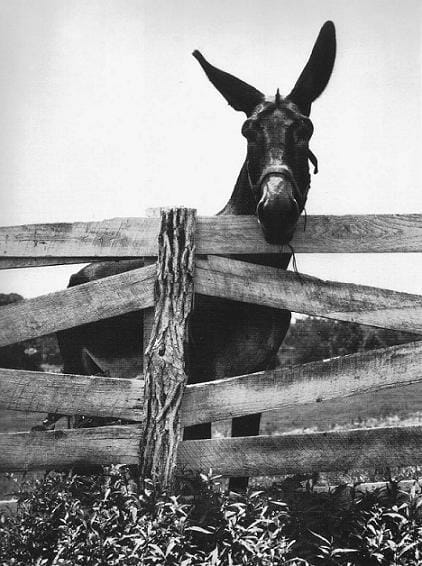 William Faulkner raised mules on his 320-acre farm about 17 miles northeast of Oxford. With the help of his brother, John, he bred mules and grew corn to feed them. In some of his works, he gave the mule a significant role as a symbol of strength, endurance and humility. J.R. Cofield recalls, “Bill saw Phil Mullen’s closeup picture of a Mississippi mule in my studio one day — I had attached to the print a clipping of his writings in praise of the lowly mule.”

Father and mother he does not resemble, sons and daughters he will never have; vindictive and patient (it is a known fact that he will labor ten years willingly and patiently for you, for the privilege of kicking you once).

“Faulkner said, ‘Looks good off by itself’ – meaning his description of the mule – ‘Want me to sign it for you?’ And he autographed it right there. Only time I ever saw Bill autograph something without being asked.”