Laissez les bons temps rouler: Also known as “Let the good times roll.” This VIP motto for Mardi Gras season is a fundamental component of N’awlins and Lower Louisiana culture—imprinted on folks around here at least as far north as Memphis and along the Gulf as far east as the Florida Panhandle. Think HottyToddy.com with a French accent.

Mardi Gras season in the southern U.S. runs during Epiphany, from January 6 until Ash Wednesday. Some cultures and some cities around the world only celebrate Mardi Gras as the final three-day period before Lent, but folks in Mobile and New Orleans celebrate the entire season. The final day known as Mardi Gras is also known as Shrove Tuesday or Fat Tuesday, referring to traditional “confess” (or shrive) traditions in the Catholic Church. It is the last day for eating rich, fatty foods before a good Christian begins fasting during the 40 days of Lent.

Mardi Gras entered the American mainland on the Gulf Coast, when the French Le Moyne brothers—Pierre Le Moyne d’Iberville and Jean Baptiste Le Moyne de Bienville—entered landfall north of the Mississippi River on March 2, 1699, which was that year’s Lundi Gras, the Monday before Mardi Gras (Fat Tuesday). The Le Moynes proceeded upriver on March 3, which was Mardi Gras Day, and made camp 60 miles downriver from the site of modern New Orleans at a place they named Pointe du Mardi Gras. Jean Baptiste went on in 1702 to found Mobile (Alabama) as the first capital of French Louisiana. In 1703, the French settlers in Mobile established the very first American mainland Mardi Gras celebration. By 1720, when Biloxi was the capital of Louisiana, the tradition had spread to French settlements across the Gulf region.

The special celebration came home in 1723 to the new Louisiana capital of New Orleans, which had been founded in 1718. But it was at Mobile that the first formal and masked mystic societies and parades occurred. These celebrations were exported in 1856 to NOLA. Modern Mobile celebrants are famous for throwing mini-moon pies from their floats, whereas the New Orleans secret societies such as Comus, Rex, and Zulu throw plastic beads, candy, and coins. 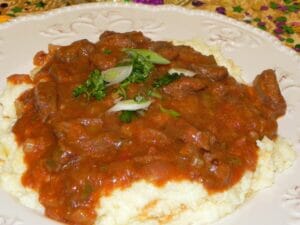 This dish is a New Orleans Creole favorite, traditionally served at brunch or breakfast, or occasionally for Sunday supper. Pronounced GREE-yahds, the meat typically is a round of beef, veal, or pork, pounded thin, and cut into bite-sized squares. Grits and Grillades traditionally is served with King Cake during Mardi Gras Queen’s breakfasts, and at brunch on Fat Tuesday.

Grease a 3-qt casserole dish. Preheat oven to 350˚F. Bring water to a rolling boil in large saucepan. Stir in grits; lower heat and continue stirring until consistency is thick and creamy. Remove from heat to cool. Scald the milk and butter, and stir into the grits. Temper the beaten eggs by stirring two tablespoons of hot grits mixture into the eggs; then quickly stir the tempered eggs into the grits until thoroughly blended. Add salt and cayenne. Fold in grated cheese. Pour into casserole dish and spread evenly. Bake approximately 1 hour and 15 minutes, until center of soufflé is firm. Cover dish and keep warm until Grillades are done.

Cut pre-cut fajita strips into bite-sized squares with kitchen shears, OR, pound the meat round on both sides until about 1/2-inch thick. Then cut into bite-size squares. Combine all the seasonings with the flour, and toss the meat in the seasoning. Reserve the excess flour.

Heat oil in a cast iron skillet or Dutch Oven until hot but not smoking. Brown the meat grillades on both sides, tossing gently to prevent scorching. Transfer the grillades to a plate. melt butter in the hot pan. Add the onions, bell pepper, and celery (Louisiana Trinity) and sauté until soft. Work in the remaining flour with a wooden spoon, making sure to incorporate drippings from the pan. Keep stirring until mixture starts to turn darker. Mix in the beef stock, crushed tomatoes, Bay leaves, and Worcestershire. Bring mixture to a boil. Reduce to medium-low and add the grillades and meat juice back to the pot. Simmer about 1 hour. Stir in the wine and cook another 30 minutes, stirring frequently to prevent sticking in the pot bottom. Add the parsley and green onion just before serving, or sprinkle on top of each serving. To serve: Mound about 1/2-cup of cheese grits soufflé (or cheese grits) in the center of each plate. Ladle grillades over the grits, garnish with onion and parsley, and serve.

King Cake is made for celebrating the Feast of the Epiphany (12th Night) honoring the three kings who brought gifts to the Christ Child. The cake is a brioche-type of bread with sweet filling, shaped into a circle to symbolize a king’s crown. Some early King Cake traditions called for hiding a bean, an orange slice, or a pecan half in the cake. The modern New Orleans tradition calls for hiding a plastic baby Jesus in the cake. The person who gets the slice containing the baby, the orange slice, the pecan, or the bean, is responsible for the next party or cake, and will have a year of good luck. Mardi Gras King Cake is decorated with three colored sugars to represent jewels, in the Christian colors that have come to symbolize New Orleans: green for faith, gold for power, and purple for justice. We have NOLA’s Rex Krewe of 1872 to thank for these signature colors on the cake. NOTE: Some readers might be able to purchase the colored sugars, but the rest of us will have to dye our own.

*Green, yellow, and purple food coloring (add a drop of blue to red for purple)

Sift cinnamon with flour and set aside. Grease a large bowl with vegetable oil and set aside. Dissolve yeast in warm water in bowl of a stand mixer fitted with dough hook. Let it stand until frothy. Dissolve salt, sugar, orange zest, and milk in a small bowl and combine with frothy yeast mixture. Mix in eggs on low speed, one at a time, then add flour. Knead with mixer on medium-low for 10 minutes until smooth, elastic dough forms. If too sticky, add more flour (I always have to add a half cup or more). With mixer still running, work softened butter cubes into the dough until blended. Turn dough out into large, oiled bowl. Cover with plastic wrap, allowing some air under the wrapping. Set in warm spot to rise for about 1 hour. When dough has doubled in bulk, remove plastic wrap, punch dough down in bowl, cover again, this time tightly, and place in fridge to rest overnight.

The next day, prepare filling by combining all filling ingredients in a bowl. Preheat oven to 350˚F. Line cookie sheet with parchment paper. Spread additional parchment paper on counter surface and sprinkle lightly with flour. Roll refrigerated dough out to an 11-by-8-inch rectangle. (NOTE: If bigger, the dough is so thin that filling will leak during baking.) Spread filling evenly on the rolled-out dough, leaving a 1-1/2-inch border on all sides. Roll the dough length-wise over itself like a jelly roll, using the parchment paper to help, and using fingers to detach dough where it sticks. If filling leaks out at the end, remove excess. Try to end up with seam-side down, or pinch the seam along the entire length and flip it seam-side down. Pull the ends of the roll and shape the roll into a circle around a very small oven-safe dish (to prevent the center from closing up). Connect the two ends of the rolled dough, pulling and overlapping some of the dough. Use parchment underneath the dough to help place the cake onto center of the lined cookie sheet. Allow to rise, loosely covered with plastic, until doubled in size, about 45 minutes. Brush dough lightly with egg wash just before baking, and bake about 30 minutes. Remove to wire rack to cool, and while warm, make a slit and insert the baby Jesus.

While cake is baking, dye the three parts of sugar with food coloring. Set aside. Make a glaze by combining the confectioner’s sugar with the bourbon or lemon juice to make a thin paste. Upon removing cake from oven to cool, drizzle with glaze. Sprinkle the colored sugars in the glaze, alternating patches of color. Warn diners to beware the baby before they munch.