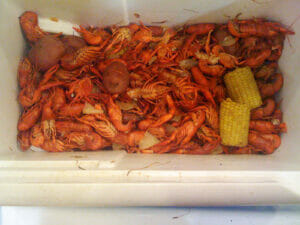 Mudbug: A colloquial term for crayfish (also known as crawfish or crawdads), those freshwater crustacean cousins of the lobster that folks around here love to consume with hot sauce and beer. Especially tasty when served up as tailgate food at a springtime SEC baseball game.

Crawfish Season 2013 is here. For weeks now, those familiar yellow banners depicting mudbugs have been flying over street vendors’ trailers in Oxford, Tupelo, Memphis, and surrounding communities. Every weekend, folks are lining up to buy them ready-to-eat, a pound or five or 10 at a time, in plain white plastic grocery bags. And every weekend, the local vendors are selling out.

Technically called crayfish, but known in the South as crawfish or crawdads, these small crustaceans are members of the superfamilies Astacoidea and Parastacoidea. They breathe through feather-like gills and thrive in bodies of fresh water such as brooks and streams, wherever fresh water is running with crevices for hiding from predators, and where the water doesn’t freeze all the way to the bottom. Crawfish feed on living and dead animals and plants, and can survive as pets in freshwater aquariums. Crawfish are super-green, as they help clean up their surroundings, but they will not thrive in polluted waters. Think of them as the freshwater environmental equivalent of the canary-in-the-mines alarm system.

There are three families of crayfish — one in the Southern Hemisphere, primarily in South America, Madagascar, and Australasia; a second in western Eurasia and western North America; and the third in western Asia and eastern North America. Several species in Australia achieve a huge size — up to 11 pounds for the Tasmanian giant freshwater crayfish, and up to 4.4 pounds for the Murray-Darling Basin crayfish. Yum!

Believe it or not, there are over 330 species of crayfish in the southeastern United States alone, all in the family Cambaridae. An astacid crawfish thrives in the Pacific Northwest and the headwaters of some rivers east of the Continental Divide. (The Old Bride doesn’t like those Northwest crayfish, which triggered an ongoing shellfish allergy, leaving only fond memories of previous occasions spent slurping our Southern crawdads.)

During the summer months, the female crawfish burrows two to three feet down into the freshwater mud (hence the mudbug name), plugs the mud hole, and lays up to 700 eggs. She nurtures the young when they hatch, and they attach themselves to mama’s tail for a ride to the surface once fall rains dissolve the mud plug. It takes 120 days for the babies to reach a size for harvesting. This is why, even though harvest season starts in November, peak time runs February to May.

More than 90 percent of worldwide crawfish consumption is based on our American crawfish supply, and 95 percent of American crawfish are harvested in Louisiana. According to Ed Lallo of Louisiana Seafood News, there were between 1,400 and 1,600 wild crawfish harvesters in 2012, and almost that many crawfish “farmers.”

In recent “good years,” more than 50,000 pounds of Louisiana red swamp crawfish and white river crawfish have been harvested annually. Whenever a bad year occurs, it is because the weather gets goofy (either too hot or too cold over too much time), causing the crawfish to die off.

Thank heavens there is no shortage of crawfish this year. Due to a mild, wet winter, the current crop came in early and is growing larger in size each week. Oxford consumers are paying $5.50 to $6.00 per pound for crawfish boiled with corn, sausage, and potatoes. It’s a bargain: Pricing in downtown New Orleans can go as high as $10 per pound, depending on the venue. And though Taylors’ Pub Owner Jason Plunk closed his bar recently, his Taylor’s Crawfish Business lives on; he sold it to the folks at Irie on the Square, but is still himself involved in the crawfish operation. One of Oxford’s best-kept secrets for crawfish was the place in the former Captain D’s building on West Jackson, behind El Mariachi (did it even have a name?), but it appears to be closed.

In our household, our primary independent crawfish resource here in Oxford is Dixie Crawfish Company, owned by Clint and Brad Petermann. Dixie Crawfish has a permanent space on North Lamar opposite the Mid-Town Shopping Center and operates a street truck at the McPhail’s Chevron at the corner of Lamar and University—and in Tupelo and Batesville on demand. These Yazoo natives have been serving the Lafayette County community since 2005. Clint told The Old Bride that Dixie Crawfish will sell crawfish this year every Thursday through Sunday, through July 4. The Petermanns also will take their sophisticated party truck wherever called to put on a crawfish boil.

There is a bit of local street competition this year from several Ole Miss students, who are operating food trucks with a bit of help from their elders. David Elnore Jr. and his friend Colby Denton, a sophomore at Ole Miss, are operating the Crawfish Hut street truck beside Bop’s on West Jackson Avenue, with help from David Sr., who also operates crawfish and festival-food shacks in Greenwood. The Crawfish Hut transports fresh crawfish from southern Louisiana twice a week, operating in Oxford each Friday-Sunday, weather permitting. They sold 1,100 pounds of crawfish in Oxford during Super Bowl weekend alone.

Josh Ryan, a junior at Ole Miss, operates P-Reaux Shrimp and Crawfish street truck with Kevin George at the three-way intersection of College Hill and McElroy Street, in Stephen and Amy Donnelly’s Bikini Beer and Mink’s parking lot. Josh has been working in his father’s P-Reaux crawfish and seafood shacks in Yazoo City, Kosciusko, Canton, and other locales for 13 years. Josh’s friends Blake Bone and Cole Edwards are helping this year, Thursday-Saturday, and they also are selling crawfish at the Library on weekends. A percentage of their crawfish sales at the Library goes to the Ole Miss hockey team.

Our region’s Crawfish Boil is related to the Crab Boil of the Atlantic Eastern Shore and to the Low Country Shrimp Boil of the coastal Carolinas region known locally as Frogmore Stew. Our crawfish version is a tad spicier than the versions east of the Appalachians, but then, so are we.

In a very large stock pot, combine the Creole seasoning and salt with water. Cut lemon in half and squeeze juice into the water. Add the rinds. Bring to a rolling boil. While waiting, cut sausage into 1- or 2-inch lengths. Add to boiling water along with the potatoes. Bring back to boil, uncovered, for 5-10 minutes.

Add the corn, mushrooms and celery to the boiling mixture and cook an additional 5-7 minutes. Add the shellfish and cook until they turn their signature color (pink for MOST shrimp, bright red for crawfish). They will start to rise to the top when done, ONLY about 3 to 5 minutes after immersion. Pour mixture into a large colander to drain, and then dump into a large platter or onto newspaper-covered surface for eating while hot. NOTE: MUST be accompanied by copious amounts of ice-cold beer, paper towels, hand-wipes, and large trash bags.

How to Eat Crawfish