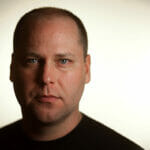 Oxford has long been steeped in a tradition of storytelling, so the founder of the website MediaStorm should feel very much at home when he comes to speak at Ole Miss on April 5.  Brian Storm will keynote a regional journalism conference with a discussion of what’s possible when you use multimedia tools to tell in-depth stories.

“At a time when so much of our attention is being siphoned off by ephemera –re-tweeted witty quips, well-liked but mostly meaningless Facebook posts – Media Storm champions the kind of deep-focus storytelling that demands a longer shelf-life,” said Cynthia Joyce, a journalism professor at Ole Miss and former Web producer for NBC Nightly News.

From 1995 to 2002, Storm was the first director of multimedia at MSNBC.com, a joint venture of Microsoft and NBC News, where he was responsible for the audio, photography and video elements of the site.

Joyce says Storm has continued to innovate with the site he founded in 2005.

“It’s one of the best examples out there of how you can use what technology has to offer in the service of a story, and not the other way around,” said Joyce. “Anyone working in digital media knows that there are infinite temptations to force your content to fit a template. Learning how to direct the technology to fit the story is a much bigger challenge, and Brian Storm has pioneered a method for doing it.”

Journalists from Mississippi, Arkansas, Tennessee and Louisiana will converge on the Meek School of Journalism and New Media and the Overby Center for Southern Journalism and Politics for the Society of Professional Journalists Region 12 Conference, April 5-7.

The region’s director for SPJ is Tony Hernandez, a reporter at the Northwest Arkansas Times.

“This conference should attract not only SPJ members, but also any journalist or student journalist. This conference gives an opportunity to get some training, hear some amazing speakers and network,” said Hernandez.

Also featured during the conference will be a workshop Joyce will conduct on social media storytelling tools.

“We’ll be talking mostly about ways to better harness some of the exploding social media: tools that help organize and integrate your growing arsenal of social media accounts; tools that boost the usefulness of your Twitter feed; and a few new content curation tools that let you capture some of the buzz you’ve been busily tracking,” said Joyce.

Using Oral Histories as an ‘Avenue to Difficult Truth-telling’