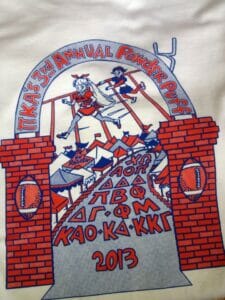 This past weekend, the men of the Gamma Iota Chapter of Pi Kappa Alpha fraternity held their 3rd annual Pike Powder Puff for charity event.

This year, the event raised $20,000 for St. Jude’s Children’s Research Hospital in Memphis.

Pike Powder Puff started on February 22 at the Pike house on the Ole Miss campus, with a pep rally for everyone participating. It kicked off with World Championship BBQ Champion Andrew Hauge.

“Bring your game face. There is one thing that I take seriously in life and that is running pork putt,” said Hauge to the volunteers who helped marinade roughly around 500 lbs of pork.

Following the dinner, the Pike new initiates offered some entertainment with the performance of a cheer skit directed by a sorority member. The winner helped earn points toward being Queen.

The following morning, everyone filed into Vaught Hemingway Stadium for the powder puff football tournament.

Each sorority spent weeks practicing –– with a Pike member as their coach –– leading up to playing in this bracketed tournament. Winners earned points towards being awarded overall winner of the tournament.

Kappa Kappa Gamma took the win and the trophy.

Tri Delta sophomore Sarah Hogue was crowned Powder Puff Queen based on her interview at the pep rally, her Tri Delta’s participation and the cheer skit.

“The event provides women of the social sororities on campus an exciting way to give to their community while increasing relationships, sorority spirit and awareness through competition,” said Wylie Coleman, the external vice president of Pike.

This year, Pike also added a men’s football into the mix.

Alpha Tau Omega (ATO) took the opportunity to make their own donation and play Pike after the sorority games.

Among these athletes were Ole Miss football players Denzel Nkemdiche and Trae Elston.

“Denzel and Trae have shown a lot of awareness to the community in my eyes by helping us out with this philanthropy the past month, and we look to do more work in the future with them,” said Coleman.