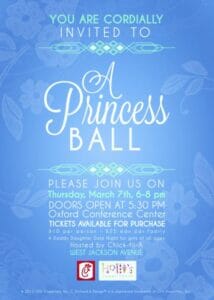 Event at Oxford Conference Center is a product of community collaboration

This year’s “A Princess Ball” Daddy-Daughter Date Night, hosted by Chick-fil-A, is at the Oxford Conference Center on Thursday, May 7, from 6 to 8 p.m. Doors open at 5:30, and the event is for girls of all ages.

Tickets are $10 per person or $25 max per family. Today is the last day to buy tickets, which are available at the restaurant.

“Our [Chick-fil-A] purpose statement is that we want to have a positive impact on all who come in contact with Chick-fil-A,” says Lance Reed, owner of the 2307 West Jackson Chick-fil-A. “This is a way to have a positive influence in the community. Our lives are so busy, it’s great for dads to take out time with their daughters.”

Reed says Chick-fil-A held the event the last two years in the store itself, but “we’ve outgrown the store. Even last year, we had to shut the store down because of the number of reservations we got.”

Inspired by an off-premise, larger scale daddy-daughter even held by a Chick-fil-A owner in the Atlanta area, Reed decided to move this year’s Oxford event to a bigger venue.

“The thing that excites me, is that, even though Chick-fil-A is the driving force behind it, it has turned out to be a community-wide event,” he says. “The Oxford Conference Center has worked tremendously to help us pull this off. Hollis Green and his staff have been great. Wayne Andrews at the Powerhouse helped us create the set. Holli’s Sweet Tooth is furnishing a lot of stuff for this event. Oxford Floral has really stepped up huge and ordered flowers for us. We’ve got three churches that have stepped up—First Baptist, North Oxford Baptist, and the Orchard.”