As the largest live music venue in town that serves beer in tallboy format, the Lyric Theatre is perhaps the perfect setting for shows in the next few days that range from the cerebral to the stoopid. Where else can so many people swarm to enjoy the massive appeal of these artists’ life dreams played out for you on a big stage, through a great sound system, as they want you to hear it? It’s all live, not Memorex. Purchase tickets at the Lyric Theatre site.

Juicy J, leader of the Trippy Nation and member of Three 6 Mafia and the Taylor Gang, invites Oxford to, you guessed it, get trippy. Castle Ent presents Trippy Fest starring Juicy J, along with DJ Epic and DJ QuinnRaynorr. Doors open at 8, show at 9.

Beach House with Holy Shit! and Dent May 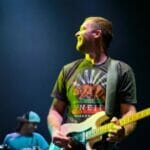 In their never-ending quest to attain fully stoopid status, Slightly Stoopid tours relentlessly. This California orchestra makes grooves flow like dank water from a kicked-over bong, allowing the music to soak into your consciousness as though it were dirty carpet.