Ole Miss co-offensive coordinator and quarterbacks coach Dan Werner is entering his 30th year of coaching football this season, but the 54-year-old family man has experienced far more in his personal life than anything he could possibly encounter in the game of football.

In fact, the Western Michigan alum’s life experiences have made him the coach and father he is today.

While the tenured coach has been on staffs at Miami, Murray State, Auburn, James Madison, Louisiana Tech, UNLV and Cornell throughout his career, something about being at family-friendly Ole Miss is very special to Werner. 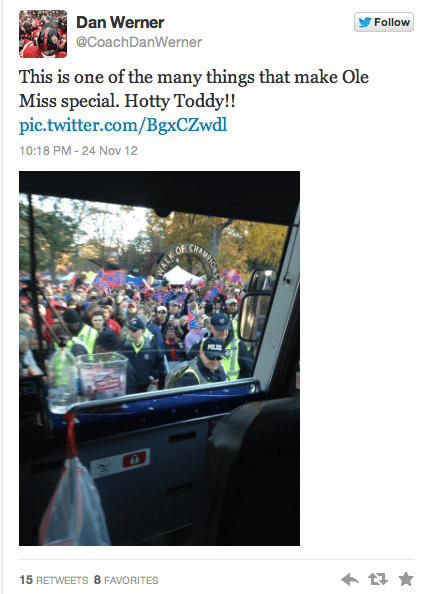 Now in his second-stint with the Rebels, having previously coached with Hugh Freeze from 2006-2007, Werner is back in Oxford under a set of totally different circumstances. While he’s coaching a team headed for success this time around, there’s a much bigger story at play in his return to Oxford.

After being an assistant at Miami from 2001-2005, Werner took a job offer from newly-hired Ole Miss coach Ed Orgeron in 2006. As college coaching families do this day and age, Werner, his wife (Kim) and two kids (Maya and Ian) quickly moved to north Mississippi. However, things didn’t turn out as the Werners had likely hoped.

At the end of 2007, Werner was again looking for a job when the head Rebel Orgeron was fired. While the Werners were happy living in Oxford, the nomadic life of college football coach meant they most-likely would have to leave Oxford for another college town (and coaching opportunity).

One Call That Changed His Life Forever

In early 2009, Northwestern State (Louisiana) hired the former Rebel assistant to be their new offensive coordinator. Suddenly, Werner was back at it recruiting and coaching for his new employer, while his family was still residing in Oxford.

However, Werner’s life was about to be unexpectedly flipped upside-down with one phone call.

The saying “bad things happen to good people” couldn’t be more true when it comes to what happened in Werner’s personal life in February 2009.

He (Werner) was on the road one morning in early February when his phone rang. It was Maya, and she sounded upset.

“There’s something wrong with Mommy.”

What did that mean? Werner sped toward home. But it wasn’t long before far worse news came.

Kim (his wife) was gone.

How could this happen? She was 37 and in great health. She was in the prime of her life, with two gorgeous little kids. Now those kids, those kids. Werner was going to have to drive to school, pull Maya out of class and tell her something that would hurt her for the rest of her life.

Ian might not get it, but Maya would. She was 10—old enough. Now was the time for Dan Werner to be strong. He was going to have to be mom and dad.

There was no way to prepare for this. At the time, Werner didn’t even know the cause of death, which turned out to be an enlarged heart. He always told his players to be tough in the most pressure-filled situations, and so he felt he had to do it now. What was he worth as a coach if he couldn’t coach himself in this horrible moment?

He got to the school, breathed deep, looked his only girl in the eye and said, “Mommy’s gone to Heaven.”

It was a call no spouse and parent ever wants to receive, but sadly it was a stark reality for Werner. In an instant, the life of an accomplished, well-traveled college football coach was changed forever.

Now without a wife himself and minus a mother in his kid’s lives, Werner had to rethink his life entirely.

Fortunately, life was about to take a positive turn for the former Ole Miss assistant. Through a friend, Werner got in touch with North Delta Academy (Batesville, Miss.) about a head coaching vacancy. For a man who had been a part of three national championships with the Miami Hurricanes, he could have never imagined life would lead him to North Delta Academy in Mississippi.

However, both North Delta and Werner would benefit from the hire. Yahoo’s Adelsonexpounded:

But the real gift was for Werner, who met other parents and figured out what “normal” meant in his new world. If he had a question about something at home with Maya, he could ask one of the women teachers. And at school events, there always was a gaggle of dads hanging out together. Meanwhile, across the room, there was Werner, gossiping with all the moms.

“I became a much better parent,” he says, “finding out what real families are supposed to be like.”

More than anything, serendipity had a hand in Werner landing at North Delta. It was truly a fortunate accident for Werner, as he not only got to coach again, but more importantly got to spend more time as a parent for two kids going through immeasurable life changes.

Back to Ole Miss

Understanding the time demands on a college assistant, especially in recruiting, he happily became head coach at a private high school inBatesville, Miss. He believed he’d never return to college coaching after working more than three decades on nine staffs.

That is, until Freeze, who had previously coached with Werner, 53, as members of Ed Orgeron’s Ole Miss staff in 2006-07, hired him last January. He gave Werner a reduced recruiting area that enabled him to spend more time at home and promoted a sense of family in the Rebels’ program that appealed to Werner.

Freeze has a seasoned coach who has won three national championship rings and who has coached four Heisman Trophy candidates. Werner has time to be the best father possible to his 13-year-old daughter, Maya, and his 8-year son, Ian, who has autism.

“I like to help people and Dan’s a friend,” Freeze said. “I know he has my back, he’d take a bullet for me. But I hired him because he’s a good ball coach.” 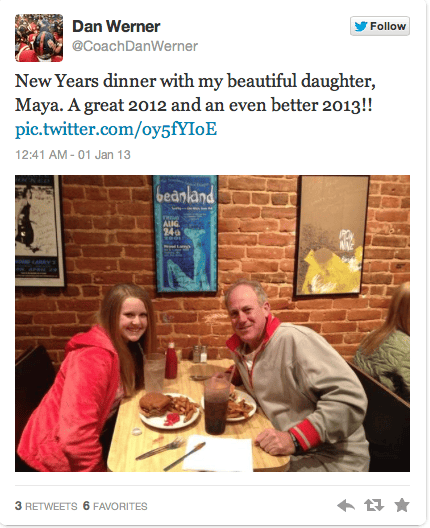 One coach needed another coach, but more importantly, one father and husband needed another. In October of 2012, Werner was nominated for the Discover Orange Bowl – FWAA Courage Award. While he didn’t win the award, he’s won much, much more in his life since that cold February morning when he learned of his wife’s passing.

In his first year back at Ole Miss this past season, he had a huge impact for the Rebel offense. The official Ole Miss Athletics site notes in Werner’s bio, “In 2012, Werner helped turn around a Rebel offense that ranked at or near the bottom of the SEC in every statistical category in 2011 to rank top five in the SEC and top 50 in the nation in scoring, total offense and passing.”

Making an Impact Beyond Football

Without question, the Rebel offense is in good hands with Werner. However, his impact at Ole Miss now goes far beyond helping quarterbacks look off defenders or read defenses.

How many parents wouldn’t do anything to have a human being, not just a coach, like Werner be a part of the their kids’ daily lives at college?

As a father of two young children myself, I’d certainly feel relieved sending my kids hundreds of miles away to be college student-athletes under the caring eye of a father figure like Werner. He’s the kind of person whose influence reaches far beyond the football field. He possesses the life experiences to help young kids deal with whatever life may throw their way in college.

Whether a student-athlete’s having a tough time in one of his classes or dealing with a sick family member, Werner wants to be the kind of guy who opens his door, ears and heart to assist. As a part of Freeze’s current staff in Oxford, Werner is definitely in the right place.

Werner explained Freeze’s philosophy to Mississippi Sports Magazine, “Most head coaches in college will sort of say that the kids are important to them but often they really aren’t. With Hugh it’s not like that—he is concerned. It is a major thing. He wants us to make sure that they are a part of his life. He knows that we can help them and he talks about it everyday.”

Under the popular assumption “things happen for a reason,” it’s glaringly evident that fate had a hand in Werner ultimately returning to Ole Miss alongside Freeze. With Werner’s experiences in football and life in general, he’s truly doing what he was meant to do right now. He’s not only raising two great kids, but he’s also trying to raise an entire team of college football players to become winners in life.