While he may not be one of the 254 players selected in the 2013 NFL draft (beginning Thursday), Holloway does stand a fighter’s chance to be signed to a free-agent deal next week. With a little work, the 6’7”, 240-pound forward has the build and athleticism to become a solid NFL tight end. 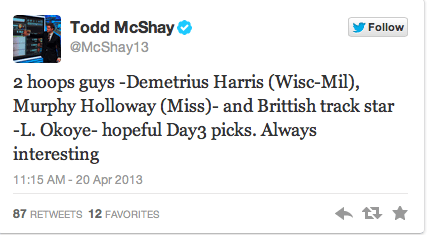 In his final season with Andy Kennedy’s Rebels, Ole Miss’ all-time leading rebounder averaged 14.5 PPG and 9.7 RPG. While he’ll likely have a chance to join an NBA club later this summer, the Irmo, S.C., native will first look to the NFL.

If you got the opportunity to watch Holloway play on the hardwood this year, you’re well aware his physical frame is a major reason he was recently worked out by NFL scouts. He may not have experience on the gridiron, but his domineering, muscular frame should be just enough for an NFL squad to offer the big man a chance.

Although not the norm, college basketball players turning pro in football (primarily at the tight end position) isn’t an entirely new phenomenon. In fact, 6’6”, 237-pound University of Wisconsin-Milwaukee F Demetrius Harris is also drawing interest from NFL teams like the Dallas Cowboys.

The Ole Miss forward has absolutely nothing to lose in trying his hand at football. If it works out, great. If not, then he will still get a chance to make an NBA roster this summer.

As one of the all-time fan favorites to wear a Rebel jersey, Holloway will have plenty of supporters in his corner whether he ultimately turns up in the NBA or NFL. For now though, expect plenty of folks in Oxford, Miss., and Irmo, S.C., to cheer on Holloway as he looks to make a splash with an NFL club.