Gooder’n grits: It doesn’t get much better than this. Think graduation week — and you are getting to make that walk across the stage. AND you have a job waiting.

We’ve all been told that breakfast is the most important meal of the day because it breaks our fast from the hard work done by our internal organs to repair and rejuvenate our bodies during a night’s sleep. With occasional exceptions, breakfast should NOT consist of a few toaster pastries, a bagel, or Krispy Kreme donuts (even though the Old Bride loves ‘em hot from the assembly line at the company’s original Stratford Road location). We should be consuming a combination of proteins and complex carbs in the form of fruits, whole grains, and meats.

Of course, the easiest and always tasty breakfast for folks on the go is a homemade parfait composed of yogurt layered with fresh berries and topped with granola. But why opt for the obvious? This week we have three dishes that add variety to the standard American, Southern Country, or Continental breakfast fare. Serve all of them with fresh fruit and juice of choice. 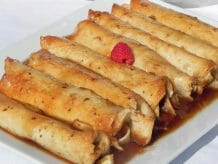 Always a crowd-pleaser, consider these the Southern-Mex variation of cinnamon rolls… except that these are quick and easy, and meet some of our daily fruit intake requirement!

Package of large flour tortillas (12 to a package)

Preheat oven to 350˚F. Lightly spray a 9-by-13-inch baking pan with Pam. Combine butter, brown sugar and water in a medium saucepan and bring to a slow boil, stirring until sugar has dissolved. Set aside.

Toss diced apples in cinnamon sugar. Place about 2 T of the sugared apples down center of each tortilla. Top with a piece of butter. Spoon about 1 tsp of melted syrup over the apple mixture and roll the tortillas tightly, tucking in the ends. Position each tortilla flap-side down in baking pan. Repeat until pan is full (about 10 to 12 rolled tortillas). Pour remaining syrup evenly over all the rolled tortillas. Bake about 30-40 minutes, pulling out pan and spooning pan syrup over tortillas after 20 minutes and again as soon as removed from oven for serving. Serve hot with fresh fruit and a dollop of crème fraiche or vanilla yogurt.

VARIATION: Apple pie filling may be substituted if you mix in some cinnamon sugar and an additional diced raw apple. The rollups will be more gooey.

Pinch of dry mustard for each egg

Dash of cayenne pepper for each egg

Line 4 oven-proof custard ramekins with the sliced ham, 2 slices per ramekin overlapped to form a nest. Break one egg into the center of each ham-lined ramekin. Sprinkle dash of cayenne and dry mustard over each egg yolk. Bake ramekins on cookie tray in preheated oven set at 350˚F. When egg whites begin to turn opaque, remove from oven. Sprinkle cheese over each cup; pour whipping cream over cheese almost to the ramekin lip. Sprinkle with salt and pepper. Quickly return to oven for about 10 more minutes, until cheese and cream are bubbly. YIELD: 4 servings.

Spread three cups of thick-cooked grits evenly in an 11-by-7-inch Pyrex dish greased with butter from the butter wrapper. Chill 12 to 24 hours, covered, in fridge. To prepare for use, cut out rounds using a 1-1/2-inch biscuit cutter. Place grits rounds on parchment-covered cookie sheet, about 1 inch apart, and bake approximately 40 minutes in preheated oven set at 375˚F. Flip after 20 minutes to toast on both sides.

Chop the boiled eggs and bacon. Toss together or serve in separate bowls for layering. Prepare Mock Hollandaise by combining the sour cream, egg yolks, salt, cayenne, and paprika in a double boiler bowl. Place double boiler over saucepan of hot water (BOWL NOT TOUCHING THE WATER) and stir until thick and hot.