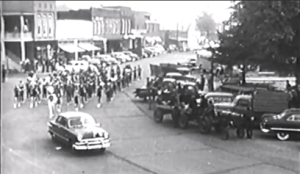 OpenCulture.com posted segments from a rare 1952 documentary in which the camera follows William Faulkner on his home turf. The film was originally created for the CBS network, the site says.

“There are scenes of Faulkner at Rowan Oak, his antebellum house on the edge of Oxford, and at Greenfield Farm, 17 miles away, where he is shown driving a tractor and talking with workers,” notes the article on OpenCulture.com, though “…the entire film is stiff and unrealistic. It’s a bit of a shock to see Faulkner, a master of the narrative form, going through the motions as a bad actor in a horribly written story about his own life. But any literary fan should be fascinated by this rare glimpse of the master at home on his own little postage stamp of native soil.”

Despite the awkward, scripted dialogue, the footage is a fascinating window into the Oxford of yesteryear. Click here to read more and view the film. — Tad Wilkes, Nightlife & Lifestyle Editor