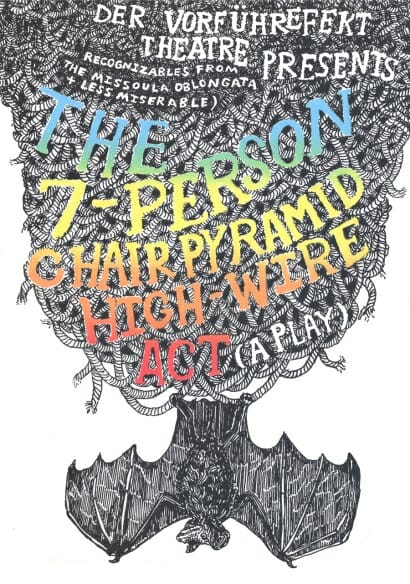 This Thursday, May 16, the Powerhouse will host two shows.

First, members of the very unique comedy troupe Missoula Oblongata will present the new play The 7 Person Chair Pyramid High Wire Act. Then, at 8 p.m., Laff Co., Oxford’s award-winning improve troupe, will take the main stage in the theatre area of the Powerhouse.

The Missoula Oblongata is an experimental theatre company dedicated to creating and touring original work. The lights, sound, and sets are all homemade, transportable, and operated by the performers themselves. “This allows us to perform in venues which are accessible—financially and geographically—to a larger population than the regional theatre system serves,” the group states in promotional materials. “We meet unlikely audiences in their neighborhoods, their parks, their favorite music venues, and their homes—and transform these spaces into temporary, anarchistic theaters.”

They will transform the Powerhouse Gallery (the front room) into a theatre for a one night only performance of their new work. The show begins at 7 p.m. Tickets will be sold at the door.

The 7 Person Chair Pyramid High Wire Act story goes a little something like this: In the wilds of Siberia, Charles Darwin goes off search of the Yeti. The Yeti (if she exists) enters a radio station’s dance contest, hoping to win an all-expenses-paid vacation to a place that doesn’t exist yet. Darwin’s research companion—a little brown bat—falls in love with the radio station’s electromagnetic emissions—but how could that ever end happily? Meanwhile, Siberia’s caves are home to a secretive tribe of ropemakers—but their disintegrating family structure may cause their ancient craft to be lost forever. Through the lens of the real life allegory of the Flying Wallendas’ famous high-wire act, two performers on a tiny stage unfold Darwin’s laboratory, unfurl anatomic diagrams of the yeti, and try to tease out the difference between miracles and non-miracles.