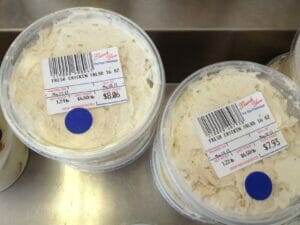 Fresh favorite by the tub or sandwich at Lindsey’s Chevron

“Tom Mistilis arrived in the United States from Greece in the early part of the twentieth century. After making his way through a steel mill up north and a bus station café out west, he eventually made his way to Mississippi. With a fellow countryman at his side, Tom Mistilis came to Oxford and quickly set up shop. From a café on the campus of the University of Mississippi in the late 1920s, to his son Angelo’s own restaurant forty years later, the Mistilis family has blessed Oxford with some memorable recipes. Angelo became known around town for his smothered hamburger steak, and he can still be found filling hungry bellies.”

Though Angelo Mistilis doesn’t operate a restaurant anymore, his chicken salad remains a popular delicacy in Oxford. It’s available at Lindsey’s Chevron, at 321 North Lamar Boulevard, by the container or in sandwich form. In addition to its rotating hot plate lunch options, Lindsey’s runs an everyday lunch special: a chicken salad sandwich, chips, and a medium fountain drink for $3.99.

The Southern Foodways Alliance documents, studies, and celebrates the diverse food cultures of the changing American South. Its mission is to “set a common table where black and white, rich, and poor—all who gather—may consider our history and our future in a spirit of reconciliation.”

A member-supported non-profit, based at the University of Mississippi, SFA stages symposia on food culture, produces documentary films, collects oral histories, and publishes compendiums of great writing. In the Atlantic Monthly, Corby Kummer dubbed the SFA “this country’s most intellectually engaged (and probably most engaging) food society.” — Tad Wilkes