Potluck: (a) The dinner to which everyone brings a covered dish for sharing with the group; or (b) That risky action a person might take without knowing the predicted outcome of the action. (Think buying a pet online without first meeting the animal, or sending your savings to be managed by a new financial manager without first vetting their references and results.)

YES, WE HAVE SOME BANANAS

Banana pudding is indelibly stamped into our Southern culinary consciousness. In the Carolinas, and elsewhere across the South, it’s the “given” dessert that always accompanies barbecue. In the Delta, it’s a must-have at the church potluck, or paired with Granny’s fried chicken. Banana Pudding is so important to us that Stephen Criswell, of the University of South Carolina-Lancaster, includes it in his ode to puddings on page 236 of Volume 7: Foodways (edited by Oxford’s own John T. Edge) in the 24-volume New Encyclopedia of Southern Culture, published by the Center for the Study of Southern Culture of Ole Miss, with the University of North Carolina Press.

Banana pudding at first glance is a simple dessert. Slice some bananas, throw in some vanilla wafers, and slather ‘em with pudding. It can be the ultimate quickie short-cut dessert involving those ’nilla wafers, a few bananas, boxed vanilla pudding, and frozen whipped cream toppings. But we all know that the best banana pudding is a carefully constructed trifle dish made with scratch custard pudding and either homemade whipped cream or meringue. Some people even make their own vanilla wafers.

So how did the South become the Banana Pudding Republic? (Term of Reference: Southern Foodways Alliance) After all, bananas are not grown here; they are imported.

Food historians have suggested that bananas and banana pudding took hold of our Southern consciousness for a number of reasons: (1) Our Southern obsession with super-sweet desserts; (2) Our Anglo-Celtic heritage of combining custards with cakes; and (3) The non-seasonal accessibility and cheap pricing of bananas, which since the late 19th century, were imported from the Caribbean and Central America through the ports of New Orleans and Biloxi, and stored in Fulton, Kentucky, for trans-continental rail distribution.

Bananas (plantains) were not always edible, but numerous tropical cultures around the globe —from Southeast Asia and the Philippines, to Africa and South America — have been developing domesticated strains since early times. The earliest documented banana domestication is of the Musa acuminata variety of plantain, uncovered during archeological excavation in the Kuk Valley of New Guinea (culture dating to circa 8,000 BCE).

Alexander the Great encountered bananas during expeditions to India circa 327 BCE. Evidence of plantain cultivation in the tropics zone of South America dates as far back as 200 BCE, thought to have been brought by sailors from Southeast Asia.

Domesticated bananas were cultivated in Rome between 63 and 14 BCE during the reign of Octavius. Muslim merchants carried bananas along their various trade routes as early as the 11th century ACE, reaching the North African and Moorish-controlled Spanish populations by the 12th century. Simultaneously, Japanese cultivators were using banana plant fibers in textiles. Their Chinese neighbors had been cultivating edible banana crops since the 3rd century ACE. Portuguese sailors transported bananas from West Africa to Europe during the early 15th century, where its Guinean “banema” name was transformed by the English to the current “banana.” Sailors carried the banana to the Canary islands and the West Indies, and finally to North America with Spanish missionary Friar Tomas de Berlanga. Those early strains of banana were the savory red and green cooking varieties known as plantains.

The plant became invaluable for intercropping use in shading coffee, cacao, and pepper plants. Sweet yellow bananas were a mutant strain discovered in 1836 by Jamaican planter Jean Francois Poujot. The mutant yellow bananas on one of his trees were sweet and tasty in the raw state, so Poujot began cultivating more yellow mutants to sell as a dessert plantain. The new non-seasonal fruit quickly became popular across the Caribbean. The easily digested starchy fruit was found to provide valuable nutrition and high energy for manual laborers, and at the same time could be stored with minimal spoilage from bacteria. One modern, medium-sized yellow banana deserves its ancestor’s good reputation. At 110 calories, it is rich in potassium (450 mg), dietary fiber (3 g), manganese (34 mg), and vitamins such as B6 and C.

First imported for the 1876 Philadelphia Centennial Exhibition, U.S. banana trade escalated after 1899, following construction of the railroad through Costa Rica, and the creation of the United Fruit Company.

The history of Western hemisphere banana economics is fraught with all the drama and titillation of a Ludlum, Childs or Baldacci novel. Entire 20th century empires have risen and fallen as a result of the struggles for control of the Pan-American banana trade. (The term Banana Republic is rooted in this history.) The banana intrigues include rapacious corporate competition, suicide, “Bananagate” financial scandals, and bribery involving leaders of nations. (The Old Bride highly recommends Dan Koeppel’s Banana: The Fate of the Fruit that Changed the World, reprint paperback edition published by Plume, 2008.)

Today, bananas account for more U.S. sales than apples and other fruits. But that could change if monoculture farming practices and Mother Nature continue to clash, unchecked. The current favorite Cavendish variety of banana grown as a monoculture crop across the tropical Pan-American zone has become susceptible to a Southeast Asian strain of fungal wilt that is related to “Panama Disease.” In only 20 years between the 1930s and 1958, Panama Disease obliterated the popular Gros Michel (Big Mike) banana — the ultra-sweet predecessor to the Cavendish. Scientists around the world are feverishly working to develop new hybrids of disease-resistant bananas so we don’t repeat that experience.

Preheat oven to 375˚F. Beat chilled egg whites in chilled bowl with clean mixer beaters on high. Sprinkle in the 4 T sugar and continue beating until egg whites form stiff glossy peaks. Ladle meringue over the custard and gently smooth out with spatula, making sure to seal meringue to custard and all pan sides. Create meringue peaks.

Place pan in preheated oven and bake about 10-15 minutes, until meringue is toasted brown on top. Turn off oven and leave door closed for 5 minutes, then crack oven door and leave pan in oven about 15 more minutes. (This is to prevent meringue from separating from pudding and from weeping.) Remove pan to rack to completely cool before refrigerating. Chill pudding about 3 hours before serving. Yield: 8-10 servings. VARIATION: Top layered pudding with wafers, frost with homemade whipped cream, and crumble a few wafers over the whipped cream.

This recipe is derived from Lauren Chattman’s Cake Keeper Cakes, 2009. It is delicious when served still hot, with ice cream, but will keep at room temperature for 2 days, or refrigerated for up to 5 days. 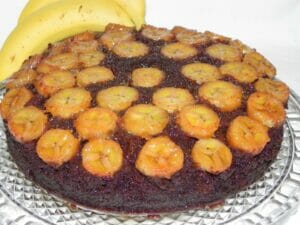 Preheat oven to 350˚F. Prepare topping by heating butter over medium heat until melted and foamy. (I whisk it to prevent browning.) Whisk in the brown sugar and set timer, continue whisking for two minutes on low heat until the mixture is thick. Spread Caramel on bottom of a round 9-inch (2-inches deep) cake pan. Arrange bananas in a tight circle on top of the sugar mixture and set aside.

Sift together the dry ingredients, using a whisk to make sure they are blended after sifting. Cream butter and sugar until light and creamy. Scrape down sides of bowl. Add eggs, one at a time, and scrape down bowl between each addition. Stir in vanilla extract. Alternate adding dry ingredients and buttermilk and beat until well blended at least 30 seconds. Pour batter over bananas in pan. Smooth out. It will be a thick batter.

Bake at least 45 minutes on medium rack, until toothpick comes out clean. Remove cake to rack to cool about 5 minutes. Run a thin knife blade around edges of pan to loosen cake from sides. Carefully invert pan on a serving tray or plate, and tap the bottom of the pan. Let sit inverted about 5-10 minutes, tap bottom again until cake slides out of pan easily.