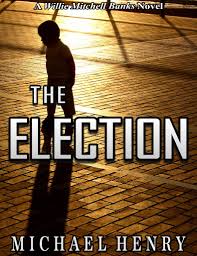 Oxford writer will be at Off Square books.

The storyline of The Election by Michael Henry goes something like this: While Yaloquena County D.A. Willie Mitchell Banks is in the middle of a nasty re-election campaign, a seven-year-old boy goes missing from a political rally on the Fourth of July. In spite of the unsuccessful search for the boy’s body, Willie Mitchell tries local banker Ross Bullard for capital murder. Without a body, success in Willie Mitchell’s murder case appears doubtful. So does his re-election.

Michael Henry and William Henry, father and son, write novels about District Attorney Willie Mitchell Banks, his attorney son Jake, and Special Forces Captain David Dunne and his D.O.G.s organization. Louisiana native Michael Henry graduated from Tulane University and University of Virginia Law School. He practiced civil and criminal law, including 16 years as a prosecutor, 12 of those as elected District Attorney. He currently lives and writes in Oxford.

Michael Henry will sign copies of The Election at Off Square Books (160 Courthouse Square) at 5:30 p.m today, May 30.