You really should’ve seen ’em; they really were a scre-am.

The Ford Center closed out its season on June 2 with a national tour stop of The Addams Family, as re-envisioned for the musical stage, engaging a post-millennial audience while remaining true to its hundred year old roots. The ties that (sometimes literally) bind a macabre clan living in a mansion/mausoleum in modern day New York City are sorely tested when Wednesday Addams falls in love with Lucas Beineke from Perfectly Normal, Ohio. The gathering of would be in-laws proves eye-opening for all.

Sure, there are throw away references about “Obamacare” and “Charlie Sheen” but the Addamses’ family dynamic, basic personalities, and wardrobes haven’t changed since Charles Addams first drew the strip for The New Yorker magazine in 1912. In fact, that was a stipulation when the Addams Foundation licensed the characters for this production by Andrew Lippa, Marshall Bickman, and Rick Elice. In this Broadway incarnation, secrets are revealed, “normal” is redefined, and true love wins the day. Along the way we get some truly spectacular company numbers starting with the opener “When You’re an Addams” with a Greek chorus of ancestor ghosts rounding out the vocals. 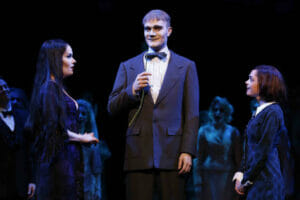 In solo efforts, Jennifer Fogarty is powerful as the original Goth Girl, and Blair Anderson perfectly walks the tragic/comic line as the Midwestern mother who bares more than her soul after a sip of Pugsley’s potion. Jesse Sharp (Gomez) and Shaun Rice (Fester) provide sweet voices of sentimentality without sending the audience into a sugar coma.

The performance was a good old fashioned musical in the best tradition of the genre. Oxford and the University are fortunate to have the Gertrude C. Ford Center consistently providing quality national tours like this one, A Chorus Line and Beauty and the Beast, and international sensations such as the Russian National Ballet and the Vienna Boys Choir. Not many small Mississippi towns can boast that sort of cultural cache, and not enough Oxonians and UM students take advantage of it.

If you find yourself regretting missed opportunities of the 2012-2013 season, there is still time to see Macbeth and Hello Dolly during this June’s 10th Anniversary Shakespeare Festival.