The 1840s: Before Opening the University, Part I

Earlier blogs have given a history of events leading to the decision to locate the state university at Oxford. Although that decision was made in 1841, it was not until 1848 that classes began. A number of factors led to the delay, mostly getting together the needed funds from the seminary account. The year after the selection of Oxford, the legislature had to take action to be sure the land was protected: 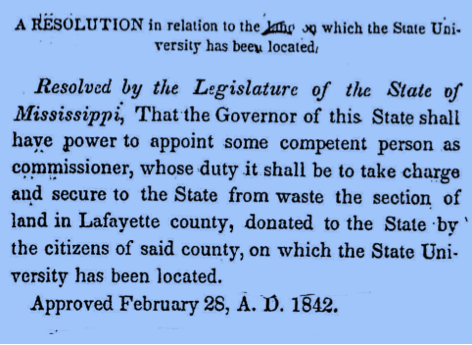 It was then necessary to have people in charge of getting things going and making important decisions about the function and operation of the new university: 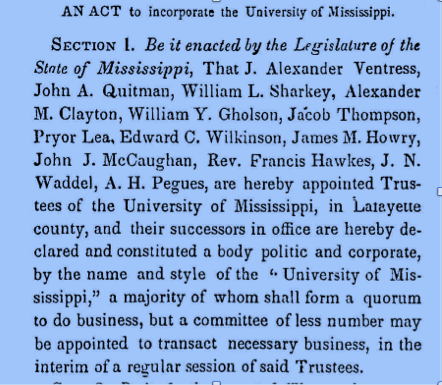 The member of the Board of Trustees, of course, would have certain powers and responsibilities: 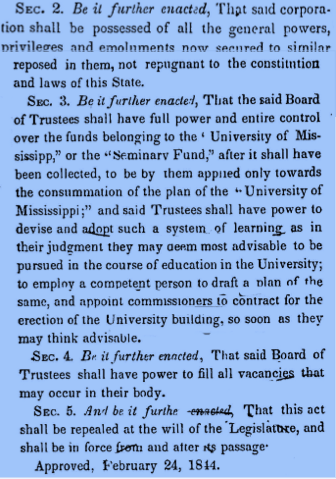 Some actions had to be taken in order for the Board to have appropriate use of the necessary funds. 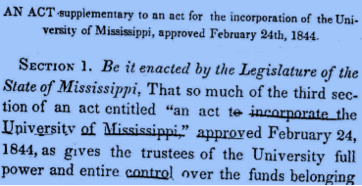 The Board of Trustees had their first meeting in 1845. “A suitable site” had been located near Oxford. Obviously the most important part in getting things going at a new university was the construction of buildings:

Future blogs will demonstrate how the Board of Trustees and officials at the University kept members of the House and Senate informed about progress on the buildings.

Gerald W. Walton was born in Neshoba County, Mississippi, on September 11, 1934. He graduated from Dixon High School and attended East Central Community College for two years. He graduated from the University of Southern Mississippi in 1956 and enrolled that fall at the University of Mississippi, where he received his master’s and Ph.D. degrees. After serving as an instructor for three years, he became an assistant professor of English in 1962 and was later promoted to associate and full professor. He served as Director of the Freshman English Program, Associate Dean of the College of Liberal Arts, Dean of the College of Liberal Arts, Associate Vice Chancellor for Academic Affairs, Interim Vice Chancellor for Academic Affairs on three occasions, and Provost. He retired in 1999 and continues to live in Oxford.