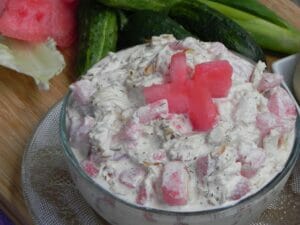 To Cotton to: To like, or to “take to” or to “stick to” someone or something, the way cotton lint used to stick to a worker’s clothing.

Summertime produce is not ALL about the corn and tomatoes, much as we all love ‘em. Zucchini’s also here. Squash is here. Eggplants and cucumbers are here. Watermelon’s here. Although they seem to multiply in a garden once taking hold, these OTHER fruits and veggies are a blessing in disguise for the creative cooks among us. They adapt extremely well to recipes that range from the sweet to the savory. They can be consumed raw, grilled, roasted, boiled, or baked, and work well when paired with the unexpected (such as eggplant with shrimp, or melon with ham).

This week we are focusing on melons. When researching watermelons in our Southern and Americana culture, I was not at all surprised to learn that watermelon, like so many other of our wonderful “Southern” foods, is thought to have originated in southern Africa. Common and wild watermelon apparently diverged from a common ancestor – possibly in Namibia.

As early as 2,000 B.C.E., watermelon was cultivated in the Nile Valley. Seeds have been found in the tomb of King Tut, and watermelon is mentioned in the Bible as a food eaten by the Israelites while enslaved in Egypt. Watermelons were grown in China by the 10th century A.C.E., and the Moors introduced the fruit to Europe in the 13th century.

French explorers to the New World found watermelons being grown in the Mississippi Valley as early as the 16th century, and the fruit was introduced into Massachusetts and other American colonies through the early slave trade. Today, watermelon is grown commercially around the world, and in 44 U.S. states. Georgia, Florida, Texas, California, and Arizona are our leading producers. China is the world’s largest producer.

Horticulturists have been working on better, less fragile, more disease-resistant, varieties of watermelon for centuries. The melon vine depends on bee pollination, and the longer growing season required to grow mature melons makes the plant more susceptible to climate fluctuations than some other crops.

Watermelon contains citrulline, an amino acid that is converted by our kidneys into arginine. This is a good thing: The greater the conversion into arginine, the less fat accumulates in our fat cells.

Watermelons of all shapes and colors are completely edible. Although most Americans cut away the rind and the whitish flesh next to the rind, these sections contain concentrations of flavonoids, vitamin C, and carotenoids, and triterpenoids, which provide antioxidant and anti-inflammatory support to the body.

Those old-timey Southerners had it right. Watermelon pickles ARE good for you. 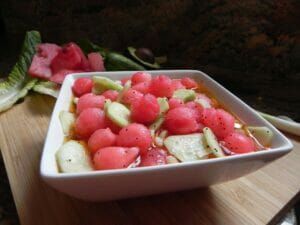 Whisk together the vinegar, oil, sugar, poppy seeds, salt, and pepper. Combine melon, cucumbers and onions in a medium mixing bowl. Cover with the vinaigrette and toss gently to completely coat. Serve immediately or let sit about one hour at room temperature before serving. Refrigerate; bring back to room temperature to serve. 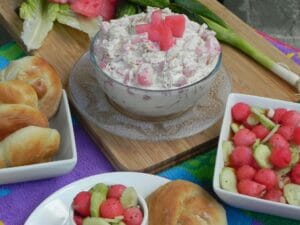 4 avocados, cut in half, pits removed

Whisk together the first seven ingredients in a small bowl. Pour over the chicken in a large bowl and stir well. It will be very wet. Add more chicken if desired. Refrigerate until 30 minutes prior to serving. Gently fold in the almonds and watermelon and serve a large scoop in half an avocado. 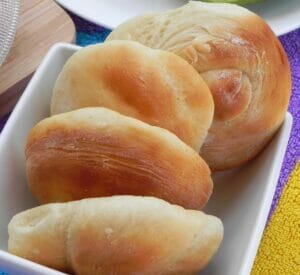 Sally Baker, a lifelong Memphis friend and an Ole Miss alumna, prepared these rolls for our July 4 crowd. She made up the dough and had rolls rising in under 30 minutes. Sally learned the recipe from her grandmother, LaVilla (Mimi) H. Newman, who, widowed at age 26, reared two children by boarding residents in her home on McLemore Avenue. Mrs. Newman made these rolls at least twice a day. It is a very forgiving recipe.

Combine yeast, first sugar and first water in a coffee mug. Set aside for yeast to activate (it will bubble up). Cream together the butter, egg, salt, and second sugar until fluffy. Mix in yeast mixture and add another 1-1/2 c lukewarm water in the yeast cup to ensure using it all. Mix in flour until it becomes pliable. If sticky, add a bit more flour.

Preheat oven to 400˚F. Grease three cookie sheets. Flour your hands and pinch off a golf ball- or walnut-sized piece of dough and roll it into a rope between fingers. Tie each rope into a knot and place knot on the cookie sheet. Repeat until all the dough is made up (about 36 rolls).

Set in a warm spot, covered with a cloth to double in size (1-1/2 to 2 hours). I place them in an oven that had been pre-warmed and turned off. Bake rolls about 8 to 10 minutes until light golden brown. Remove from oven and rub butter wrapper over tops of rolls, if desired. Rolls freeze well. Simply microwave frozen rolls about 15 seconds.

REFRIGERATOR VERSION: Place dough in a greased bowl and cover tightly with plastic wrap sprayed on dough side with nonstick cooking spray. Refrigerate as long as three days, until ready to make rolls. When ready to bake, preheat oven to 400˚F and follow prep instructions above. 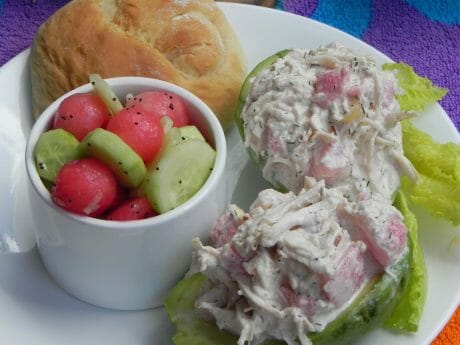