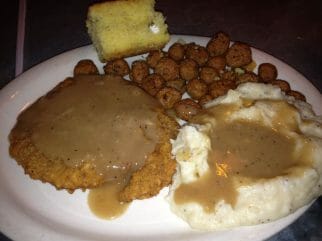 Mick Jagger never checked at Ajax in his quest for satisfaction.

“Well, what’s the secret to good gravy?” I prodded, to which he said, “I’m not telling.”

That’s cool. I like an element of mystery when I enjoy my favorite lunch at Ajax: country-fried steak with gravy, mashed potatoes with gravy, fried okra, and sweet tea.

But Randy’s not quite as evasive as, say, Dan Mullen being asked about injuries. As to why the brown gravy all over my food is so delicious, he says, “I guess because it is made from scratch every day.”

I overheard another patron’s lengthy cell phone conversation nearby. He apparently doesn’t live in Oxford but explained to the person on the other end, “I come up here for acupuncture.” While I acupunctured my country-fried steak with my fork, I thought to myself that people come to Oxford many reasons, but acupuncture is a new one on me. Evidently he also comes for the food at Ajax. That one I’m familiar with.