Blog: The 1840’s Before Opening the University, Part V

The Governor and members of the state legislature continued to request reports about the progress of the establishment of the University, and eventually the statements became almost boiler-plate announcements since only so much could be said.

Once things actually got underway, the reports could be different. An 1850 report speaks to money spent and comments especially about the beloved “principal building” (the Lyceum):

There was then discussion of the area now called The Circle. Or since there were no demarcations at the time, at least part of the present Grove may be included among “the grove of lofty forest trees.”

Next was a discussion of the cafeteria, the overall construction of the buildings, and costs involved.

It was then explained that the faculty consisted of four men, one of whom also served as president.

There was discussion of a library, but in truth the library was extremely insufficient. Jacob Thompson probably contributed more books personally than the University purchased in the early years.

The report comments that the University had gotten off to a good start, that finances were in order, that hopes were high about such things as the purchase of books and scientific equipment, that the faculty members were highly qualified, and that the students, though smaller in number than earlier, were studious and well behaved. 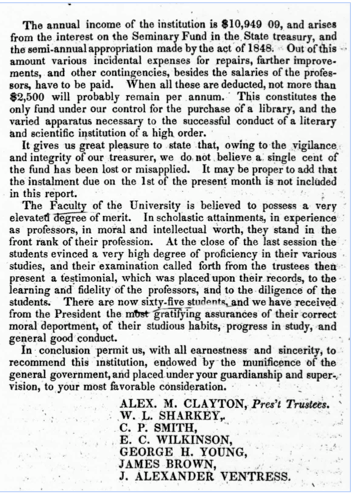 Gerald W. Walton was born in Neshoba County, Mississippi, on September 11, 1934. He graduated from Dixon High School and attended East Central Community College for two years. He graduated from the University of Southern Mississippi in 1956 and enrolled that fall at the University of Mississippi, where he received his master’s and Ph.D. degrees. After serving as an instructor for three years, he became an assistant professor of English in 1962 and was later promoted to associate and full professor. He served as Director of the Freshman English Program, Associate Dean of the College of Liberal Arts, Dean of the College of Liberal Arts, Associate Vice Chancellor for Academic Affairs, Interim Vice Chancellor for Academic Affairs on three occasions, and Provost. He retired in 1999 and continues to live in Oxford.