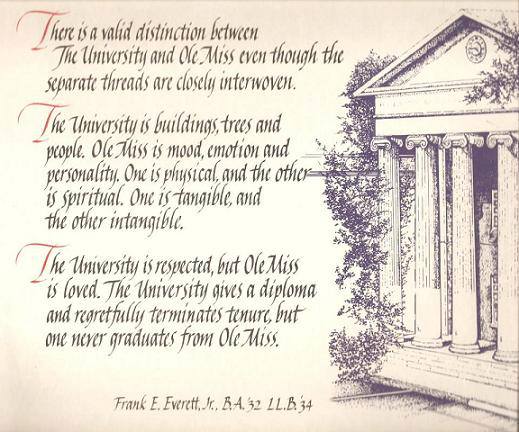 Frank Everett received his bachelor’s from The University of Mississippi in 1932 and his law degree in 1934. While at Ole Miss, the Indianola native was elected Colonel Rebel and student body president.

In Vicksburg, Everett was a partner at Brunini, Everett, Beanland and Wheeless. In addition to his legal career, Everett authored a book on Brierfield, the Warren County home of Confederate President Jefferson. He was past president of the statewide Ole Miss Alumni Association, and is a member of the Ole Miss Hall of Fame.

Ole Miss alums have fond memories of Everett and the poem he penned about his alma mater.

“Mr. Everett was a great person. He was a true Southern gentleman,” recalls Ed Canizaro. “(I) miss him and his wife, Clyde. I was at the Warren County Ole Miss Alumni banquet when Mr. Everett read the poem for the first time. It was wonderful. Joann Sharborough called Mr. Everett the next day to get a copy of the poem. He had thrown it in the thrash and had to retrieve it. I am happy to say (we) have a copy of the complete original poem.”

Another Ole Miss alum, Dr. Ed Meek, remembers his first encounter with Everett while Meek was a student at The University of Mississippi.

“I first met Mr. Frank Everett when I was a young greenhorn student photographer running around campus. From these first days at Ole Miss, a lifelong friendship with a most gracious Southern gentleman was stuck. Later, when Frank was president of the Ole Miss Alumni Association, we visited on campus, and as we talked Frank mentioned his poem and pulled his original copy from his coat pocket. I had heard about this recently spoken wonderful poem but words here can not do justice to the words I read. The Everett poem goes to the very heart of what the Ole Miss family knows: you never graduate from Ole Miss.

The idea to create the print of the now famous poem came from this original meeting with Everett, Meek says.

“I worked on the red and blue design with the Lyceum drawing and presented it to Frank and the Ole Miss administration, and both loved it. Since then. thousands of copies have been given away to the Ole Miss faithful and framed copies can be found on Ole Miss walls from coast to coast. Some years later, when Ole Miss began plans for the present day student union building, I felt it wholly appropriate that Frank’s poem be included in this new center of everyday student life on campus. The chancellor readily agreed, and after completion of the new union I was happy to see Frank standing and gazing upon his work. He was very pleased. Not long afterward Frank Everett passed away. Now he and his great poem belong to the Ole Miss ages. Frank was a fine a man as I’ve ever had the honor to know and call friend. The University of Mississippi is a richer institution for his presence in its history.”

“The University is respected, but Ole Miss is loved. the University gives a diploma and regretfully terminates tenure, but one never graduates from Ole Miss.”
–Frank E. Everett, Jr.