On Cooking Southern: As Country as Corn 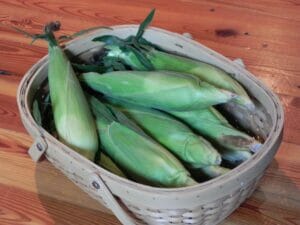 Get an earful of confetti corn and creamed sweet corn.

SOUTHERNISM OF THE WEEK: Rough as a cob: A person whose personality needs refining and smoothing out… like those old dried-up corn cobs in the outhouse …

SUMMERTIME IN THE CORNFED NATION

Corn time in Lafayette County is in full swing at last. It’s been a long time coming this summer. Corn is a staple of American culinary life, dating back to the earliest native occupants of the land. We Southerners probably couldn’t exist without it. Think of our cornmeal, our masa, our grits, our corn-based veggie dishes, and our zillions of beverages containing evil but addictive corn-syrup additives. Growing corn should be a simple activity because, after all, corn is a grass. However, corn can sap the soil of its nitrogen and other nutrients, which is why the original Americans rotated locations and planted fish with the seeds.

Corn also is susceptible to assorted blights, insects, and diseases, if not grown through responsible farming practices. And then there’s the weather … Whether urban or rural, every Southerner fears extremes of weather that affect our very lives and the availability of our beloved tomatoes, melons, and corn. We understand all too well that Mother Nature just loves to mess with folks. One year we’re fighting scorching heat and record-breaking droughts that cause farmers to plow under an entire year’s crops. The next year we are swimming – literally – to coax at least SOME crops out of rain-soaked soils. 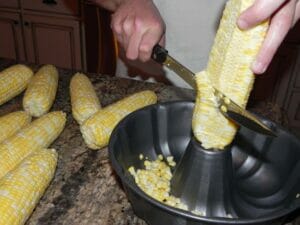 A year ago, the evening news featured too-wet weather in the far West, contrasting with drought in Texas and the Midwest, whose farmers were forced to abandon thousands of acres of corn scorched by record-breaking drought and heat. It was almost incomprehensible to The Old Bride, who had driven past endless miles of emerald-green Indiana and Illinois corn fields in early May, when they still promised a future of plenty. This year’s growing season has been the opposite, leading to other agricultural issues.

Record-breaking cool and wet weather postponed spring corn planting all across America. The U.S. Department of Agriculture estimated on August 1 that Mississippi farmers had planted fewer acres in corn than in previous years – about 900,000 acres of corn for 2013 (most of it planted late); but we might only end up with 700,000 acres of corn due to the unnaturally wet weather patterns affecting most of the Deep South and Southeast. Successful corn maturation depends on heat accumulation. While we have all been enjoying the most comfortable summer in memory, those corn kernels have been lagging behind in plumping up for picking. The corn that’s been harvested to date has been large and in some locales a better-than-average yield. However, late-maturing corn in these parts is particularly vulnerable to fall rains and tropical storms. The extra rain can reduce completion of kernel development on late-maturing corn ears due to soil-oxygen deprivation. Too much wet soil also reduces farmers’ ability to harvest the crop and to conduct needed fall tillage for the following year.

Northern Mississippi thus far has been more fortunate than our southern and eastern neighbors because we have missed the worst rains. It could be worse. Georgia and Virginia have been delayed, but their crops still have a chance. South Carolina has been devastated, with crop damage exceeding 30 percent in 36 of the state’s 42 counties. Parts of Louisiana and North Carolina have been devastated as well, and this week’s torrential rains bode ill for the Gulf and South Atlantic coast regions. … Makes a person wish we could send some of that H2O out West, where all the fires are raging.

One of the activities I loved most upon joining my hubby’s family was when we would gather under the trees behind the farmhouse after my in-laws picked corn in their huge garden. We would work in teams to shuck, silk, blanch, and package the fresh corn. Some family members were better at removing the silk than others, and we all knew who not to assign that task. No matter how many bushels of corn we prepared, the process was never tedious when laughingly shared with loved ones. Freezing fresh corn is not difficult or particularly time consuming. The fundamental principle involved in freezing corn is to blanch it first. This may be done with the kernels on or cut off the cob. Blanching is a process of heat-treating the corn briefly in boiling water.

Blanching inactivates the enzymes that break down and destroy beneficial nutrients in the corn. Those pesky enzymes also will change the color, flavor, and texture of the corn as they break it down. The corn should be blanched and frozen within two to six hours following harvest. In an ideal world, that means getting to the farmer’s market as soon as it opens to make your purchase, or sweet-talking your next-of-kin into giving or selling you corn right out of the garden. Rush home and begin. Do not postpone the process. Older fresh corn remains viable for freezing, but the corn enzymes will already have begun breaking down the fresh-picked flavor. If you leave it too long, you’re better off turning the corn into skillet-fried corn.

Here’s what’s needed to blanch and freeze the corn:

Largest pot with lid that you have, such as a 12-qt stockpot or a canning pot

Basket insert for the pot, if available

Tongs for grabbing the corn

Two bags of ice (at least)

How to determine size of corn ears:

Here’s how to prepare the corn:

Set up in the kitchen or back porch. Spread out newspapers. Fill sink or a dishpan with cold water and ice chest or turkey-roaster with ice and water. Shuck the ears of fresh corn by peeling downward toward base, removing the corn silks as you shuck. After removing as much silk as possible by hand, gently brush the soft-bristle vegetable brush or toothbrush downward to remove silk from between the kernel rows. Brush gently to avoid bursting the kernels. Trim away remaining stalk at the base and unplumped ear tip. Rinse in water, brushing again to remove remaining silks. Bring large pot of water to a boil and immerse basket of clean corn, or drop in corn with tongs.

Do NOT overfill because the corn will reduce the water temperature below boiling and must be raised back to a boil quickly. The desired turnaround time is a minute or less. (The boil-water may be reused for new ears up to four times, as long as new water is added each time.) Begin timing as soon as the water resumes boiling. Blanch large ears of corn for 11 minutes; medium ears for 9 minutes, and small ears for 7 minutes. Remove immediately from the boiling water and plunge the ears into the ice water. It should sit in the ice bath as long as it was boiled; so 11 minutes for large ears, 9 minutes for medium ears, and 7 minutes for small ears. Add ice to keep it icy. Pat ears dry, cool completely, then roll each ear in Saran wrap and pack into dated freezer bags. Immediately place into freezer. Be sure to freeze no more than 2 to 3 pounds of corn per cubic foot of freezer capacity within 24 hours to ensure rapid–freeze and to prevent spoilage of other frozen food.

In a good freezer, corn should last through the winter. To freeze cream-style corn, blanch the ears for 4 minutes, cool promptly for the same time; drain. Cut kernels off the cobs at 2/3 kernel depth; do not scrape the cob. Pack tightly into quart or pint freezer bags. NOTE: vacuum sealing is a very good option. To cook, microwave the frozen ears about 3 to 4 minutes or drop frozen ears into boiling water for 5 to 6 minutes. Make creamed corn in the usual manner. See recipe below.

Only after returning to this region did I realize that my Delta family’s favorite recipe for skillet-fried corn is a version of Maque Choux, that popular southern Louisiana side dish adapted from American Indians by the Acadians. Maque Choux traditionally consists of corn fried in butter or bacon grease (or both), along with all or part of the Louisiana trinity (bell pepper, onion and celery), a smoky meat such as bacon or local sausage, and a splash of cream, with or without chopped tomatoes. It’s a great way to recycle leftover boiled corn.

6 to 8 large ears of sweet corn, fresh or already boiled

2-oz jar of chopped pimentos, with the juice 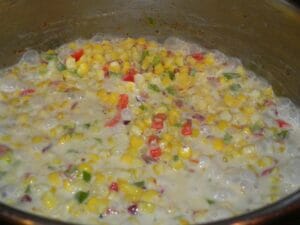 Cut corn off the cob, and scrape the corn juice into the bowl to use with the corn. It may be leftover boiled corn, or fresh from the garden. Heat butter; sauté the onion and bell pepper until tender.

(NOTE: The dish may be started by frying the bacon strips in the skillet, sautéing the veggies in the bacon grease along with 3 T of butter.) Add the corn, its milky juice, salt, and pepper. Simmer about 2 minutes. Stir in bac on and pimentos in their juice; simmer about 1 minute before adding the cream. Continue simmering, stirring to prevent scorching, until liquid cooks down. May be reheated.

YIELD: About 6 servings. VARIATION: Add a dash of cayenne pepper with 1 c diced local sausage (I like Tasso or Conecuh) or a pound of chopped crawfish, along with 1 c chopped tomato with the bell pepper and onion to transform this from a side into a main dish.

In our family, we survive the winter by making creamed corn from the blanched corn we have frozen. Leftover boiled corn also is perfect for this dish. Frozen uncooked corn kernels may be used in a pinch, but canned corn will not produce the desired results. Some people add a tablespoon of sugar to the simmering corn. Really good, fresh sweet corn doesn’t need it.

Salt and pepper, to taste

Cut 6-12 ears of corn off cob. Heat butter and water in heavy medium saucepan and add cut corn. Simmer on medium heat about 3 to 5 minutes, stirring to prevent sticking, until liquid begins to reduce. Cover for 5 minutes. Remove lid, add 1/2 to 1 cup of cream, salt and pepper. Stir with wooden spoon. Simmer a few minutes to reduce liquid, but only just to the boiling point (do not boil or the cream will separate). Stir in cornstarch and simmer longer, if thickening is still needed. Turn off heat; cover until ready to serve, or serve immediately.