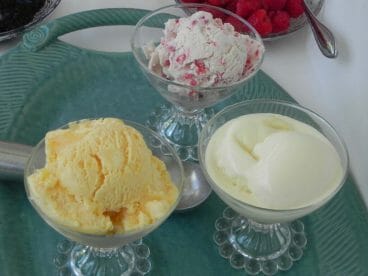 Get a handle on heat-beating treats.

Lemme tell ya: A particularly annoying prefix used by folks from around here when about to make an emphatic statement. Mea culpa my darlings, for I use it, too. Lemme tell ya, it’s a very difficult expression to shake off, like … you know?

I SCREAM, YOU SCREAM, WE ALL SCREAM FOR ICE CREAM

The summertime humidity dropped this week and Labor Day is behind us, but it’s still hot enough to pull out our sure-fire ways to beat the heat. Wide brimmed hats. Sunglasses. Car covers. Frosty drinks. Homemade ice cream.

Ice cream as we know it has come a long way since King Solomon enjoyed iced drinks at harvest, and since King T’ang of Shang, founder of the Chinese T’ang Dynasty, had 94 “ice men” to haul blocks of ice to the palace for his favorite iced dish made from cooked milk, flour, and camphor.

It’s become fairly painless to make small quantities of ice cream in tabletop 1-1/2 or 2-quart electric freezers. In my opinion, though, the best ice cream comes from a crank churn that requires bags of ice and rock salt. Motorized crank churns are readily available, and even the old wooden hand-crank models are available as “vintage” items.

Making ice cream is a scientific process. The milk or cream liquid must be high-fat, as ice cream legally must contain at least 10% milk fat so that the “churning” process during freezing converts it into a consistency between whipped cream and butter. The freezing process requires ice and salt to be layered around the churn canister in a ratio of about three parts ice to one part rock salt. (The salt lowers the freezing point below zero.)

Tabletop ice cream makers include a bowl lined with freezable liquid and salt that must be frozen before each use. The tabletop freezers are designed to quick-freeze small amounts of soft-serve ice creams, sorbet, or yogurt. Hand-crank and electric-crank churns are designed to produce large quantities of ice cream or sherbet. They include tall metal canisters into which a paddle (called a dasher) is fitted in order to churn the liquid. To prepare for churning ice cream, always sterilize the components first by scalding the dasher and canister. Tightly cover the canister containing the dasher and chill before adding the ice cream liquid, which then must be refrigerated for about 6 to 8 hours, unless stipulated otherwise.

When ready to make the ice cream, make sure to have on hand two to three bags of crushed ice, as well as rock salt, and towels or newspapers. Never fill the canister more than two-thirds full: The freezing process expands the cream; overcrowding in the canister causes grainy texture.

When the churn quits turning, remove the dasher and use a long spoon to pack the ice cream down into the canister. Cover tightly, add more ice and rock salt in the churn to the top of the canister (four parts ice to one part salt this time), and cover the entire churn with newspapers or towels for one to two hours (two is ideal). This “ripens” or “cures” the ice cream, which then can be served immediately, or transferred to the fridge freezer. 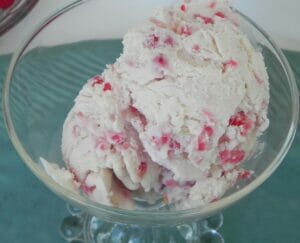 Nina Tocci of Thomasville, AL, shared this recipe with me last summer when I was visiting LA (Lower Alabama). She had obtained the recipe from Whole Living Magazine. You’ll want to double the recipe. At least. And then some more.

Pinch of coarse salt (I use sea salt)

Beat together the first five ingredients. Beat in the cream and pour into frozen bowl of tabletop ice cream freezer (1-1/2 qt or 2 qt size). Turn on and freeze about 25 minutes. Stop and stir in raspberries. Turn freezer back on for about 5 to 10 minutes. Pour into a plastic container and tightly cover. Freeze at least an hour or two to ripen and harden the ice cream. Yields about 4 c of ice cream. Good for about 4 days.

I had purchased a 32-oz bag of frozen cut mango, papaya and pineapple chunks. The bag was just screaming to be used in ice cream. I adapted my family’s peach ice cream recipe, and froze it in my old Rival ice cream churn. Feel free to cut up some fresh mango and papaya for this recipe, and add only the canned, crushed pineapple. This ice cream must be consumed within 8 hours or the pineapple’s bromelain enzyme will turn it bitter.

Two to three 10-lb bags of ice, crushed as used

Pour frozen or fresh fruit into a large bowl. Sprinkle first sugar over the fruit and mash a bit. Blend eggs, second sugar, salt and milk and pour into a saucepan or a double boiler. Turn burner onto medium-low and cook slowly, stirring (but not whisking) with a wooden spoon until SLIGHTLY thickened. There is a crucial point at which slightly thickened can overheat and curdle the custard (which is un-fixable). Remove from heat and cool completely.

While custard is cooling, pulse the fruit in a blender to mash. Feel free to puree. Combine the fruit mash, cream, and vanilla with the cooled custard. Pour into the ice cream canister and freeze according to freezer directions. The ice cream will take about 55 minutes or slightly longer to freeze (motor will quit when ice cream is frozen).

Remove dasher and use long spoon to stir in the additional crushed pineapple. Replace lid on canister, add more ice and rock salt to churn, and cover with newspapers or large towel to “ripen” the ice cream for about an hour. Either serve immediately, or scrape ice cream into a large plastic container, cover tightly, and freeze until ready to serve. Yields about 6 quarts. Good for up to five days if all pineapple is omitted. VARIATION: Substitute 4 c fresh sliced peaches and follow instructions. 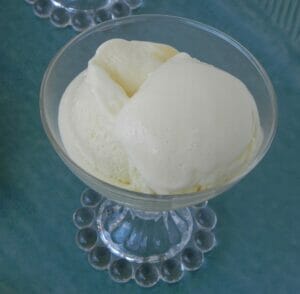 The Old Bride had run across numerous recipes posted by major food stars for buttermilk ice creams, and became curious. After all, buttermilk has lower fat content than whole milk. All versions are custard bases containing only egg yolk, and the recipes are virtually identical except for quantities and additions such as strawberries. Ever curious, I attempted to make buttermilk ice cream for myself.

And attempted, attempted, attempted. The first batch curdled from over-whisking at too-high heat. The second batch simply would not freeze in my 2-quart tabletop freezer (not enough chill or dasher friction). For the third batch, I doubled the recipe, cooked the custard low and slow, and reverted to my old-fashioned crank churn. OMG. Fabulous! Lemme tell ya, there’s a fine line between success and failure with this ice cream, but the resulting silky-smooth texture and tangy taste are worth the effort. It’s even better topped with a drizzle of warmed-up Blueberry-Peach Jam from Tom Conner’s farm in Blue Mountain, MS.

Combine the heavy cream and 1 c sugar in a large, heavy saucepan. Whisk egg yolks and remaining 1/4 c sugar in a large bowl. Bring the saucepan of cream and sugar to a simmer on medium-low heat, stirring slowly from time to time to keep sides scraped down. Do NOT whisk.

When the cream has scalded (bubbling edges but NOT boiling), remove from heat. Using a ladle and a whisk, spoon some of the hot cream mixture into the eggs, whisking to prevent curdling. Repeat this tempering process about four times, whisking continuously. Pour the tempered egg mixture into the remaining cream in the saucepan, whisking as you pour.

Resume cooking on low heat, stirring slowly, until mixture thickens and coats the back of a large metal spoon. I used a silicone spatula as well, to remove bits from the pan bottom and sides. When the mixture is thick enough, there will be some lumps on the bottom, but the mixture will not have curdled. Remove from heat and use spatula to continue stirring, using a folding rhythm. Strain the cooling mixture through a sieve.

Whisk in the vanilla, then whisk in the buttermilk and salt. Pour immediately into the ice cream freezer canister, cover, and refrigerate overnight (or about 8 hours). Freeze according to freezer directions. It took mine about 55 minutes in the churn freezer.

VARIATION: Create a fruit ice cream by mashing or pureeing 4 c of fresh strawberries, peaches, raspberries, or blueberries. Chill the mashed/pureed fruit. Add to the custard in the canister before starting to crank for freezing.