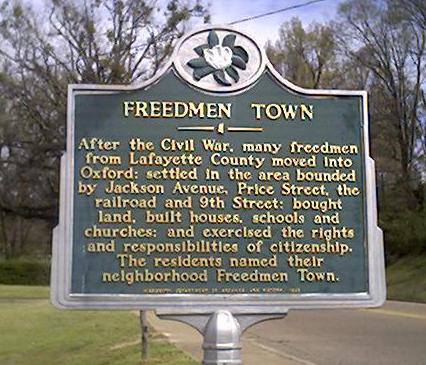 I remember Freedmen Town. I remember riding with Dad or Granddad taking Mamie home after work. Rough dirt roads, not a rock of gravel, no gutters, no street lights, no traffic signs or sidewalks here. No sir. A few sound structures but mostly wood and tar paper shacks. In my memory the old dirt road was more like a wide pig trail and to a kid holding onto the dash as the car rocked…it was great fun.

In 1866 the Oxford Mayor and Board only met two times. The Square and the Courthouse had been burned to the ground, the local and state economy had been destroyed and most of the Ole Miss boys had formed ranks in front of the Lyceum and marched off to war and were never coming back. It was bad. So the first board meeting was to declare that the town had no funds for the surveying of the burned out store lots and that the owners would have to do the best they could. The second meeting was to direct the Marshall to take a count of all former slaves in Oxford to determine if any of them were in need of economic help.

When the Civil War ended and the slaves from out in Lafayette County were no longer tied to the farms, many took their families and moved to Oxford. These new Americans settled in the area of town bordered by Jackson Avenue, Price Street, 9th Street and the railroad tracks. Their progress in building a new community was a slow struggle for decades but through it all Oxford’s black men and women bought land, built churches, schools and houses. They called their neighborhood Freedman Town, which soon became known as “Freetown.”

Mamie Phillips was born and raised in Freetown. She came to work for Grandmother Cofield in 1928 when Dad was a year old. Mamie was 12. And some 40 years later when the G-Men came to town with the plans to finally raise the standard of housing in Oxford to the same level for us all I can remember Dad and Granddad huddling over papers at the dining room table to make sure they saw to it that Mamie Phillips got hers. And when her new brick home was finished and Mamie was settled in, we all went over for a house warming. Granddad asked Mamie if she had everything she needed. Had the workers done everything right? She choked a little bit
and said ‘scrubs.’ Dad said, “Huh?” Mamie said, “All her life my Momma just wanted a little brick house with bushes and flowers in the front yard.”

So the next day Dad was in Freetown diggin’ holes and planting ‘scrubs’ and Mom was hanging baskets of blooming plants on the front porch. The years rolled on and the bush grew big and changed as Oxford grew up and changed, and changed some more. Mamie Phillips worked for Granddad and then Dad for 58 years, and buried them both.

Mamie spent the first half of her life ‘separate and unequal’, but she finished it strong as a full citizen of Oxford, Mississippi. And when she passed away and we gathered to lay her to rest we did so at her beloved Baptist church just a few yards away from her little brick house with bushes and flowers in the front yard in Freetown.