Allison Hayes Freeze – Helping Others After a Devastating Loss

Allison Hayes Freeze and her young daughter were overwhelmed with help and support during an incredibly hard time. Now, they are giving back in a way that is so inspiring.

Allison has one of the most positive attitudes of anyone I have ever known. I first met her back in my television news days about 15 years ago when she was an aspiring sportscaster. Bubbling with enthusiasm and drive, Allison had gone from her small hometown of Niles, Michigan to study broadcasting at the University of Florida. She had a dream of being a female sportscaster. I could see she had potential so I encouraged her. Her positive attitude was the thing that told me she would do well.

She eventually was hired as the weekend sports anchor at the Fox affiliate where I live in South Bend, IN. The viewers came to love her upbeat style of sportscasting and community involvement. Everything was wonderful. She had married her high school sweetheart Rob and they had a young daughter Emery.

Then, in August of last year, Rob was driving home after have going over to Illinois to watch the Chicago Bears practice. His truck left the road and he was killed. 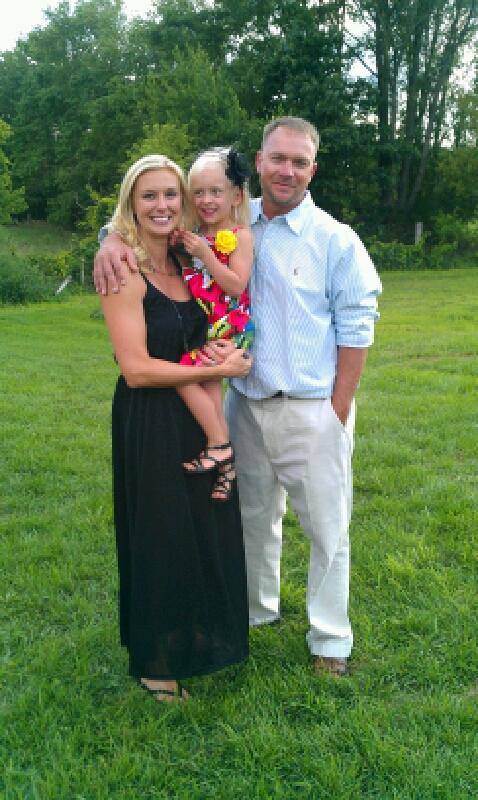 I wouldn’t begin to try to write about the shock and sadness she and her daughter went through, but has happened since is an amazing example of the goodness that is out there, and the power of a message from a rainbow. While a grieving Allison missed work for awhile, including the next Friday night of reporting on area high school football games, the community responded. At the end of the first quarter of a local game, cheerleaders from NorthWood and Jimtown High Schools passed buckets through the stands. By the end of the game a total of $1,093.33 had been collected for a fund for 3 year old Emery.

Allison received an incredible amount of support from people she knew and did not know. “People sent Build a Bear gift certificates for Emery,” she told me. “She really liked those. We got all kinds of encouragement cards not just for a few weeks after what happened, but throughout the year. They really do mean a lot, that people take a few minutes to write. People would come over and do yardwork. My yard is really much too big for me to handle, so teams of people would show up. It was breathtaking to see. The Christmas Commandos were phenomenal. The way they made us feel….”

(on Christmas Eve, the commandos visit homes where there is great sadness due to a tragic death of a child or parent with children at home … the commandos leave gifts of love in hopes to bring joy to the remaining family members … decorations of garland, ornaments, and candy canes are hung around the yard and an angel statue is left in memory of the lost love)

All of this left such an impact on her that Allison has formed a non profit known as One Good Deed Michiana.

“We all know someone who goes above and beyond to help others,” she said. “Whether it be organizing a benefit for someone in need, dropping food off, running errands, writing letters or volunteering their time. I want to let those people know that what they are doing is meaningful and they are appreciated! What is so nice is they they don’t do it for recognition but because it’s the right thing to do.”

“Our motto is, ‘Helping those who help others because one good deed can change a life.'”

She has tirelessly worked to get this going. Allison says the plans are to honor about six people a year. They want to do it right and make each one special. Not long ago, the first recipient was honored, a lady named Janet Price. An avid supporter of the nearby Warsaw High basketball team, she puts together goodie bags with motivational sayings for road games. She provides treats at home games and holidays. She takes hundreds of pictures and gets them developed and gives them to the players. She also makes meals for area folks going through hard times and sends out encouraging notes to them. She had been nominated by Doug Ogle, the Warsaw High boys basketball coach.

Allison, her daughter, and members of the Tigers team showed up at her house with a basket full of gifts.

With tears streaming, Janet (on left) was overwhelmed as Allison presented her with a gift basket filled with season tickets for Price and her mother to attend Wagon Wheel Theatre, donated by the theatre. Bennigan’s restaurant and Owen’s Super Market have her gift certificates. Artist Nancy Swan Drew donated framed work.

Knowing she loves cameras, they also got her a Nikon digital camera, tripod and case as well as some photography classes from Blosser’s Photography.

“The idea is to let her know that what she is doing is appreciated and we hope she inspires others to do the same,” Allison said. “What we are doing is not earth shattering but so many people do the little things that mean so much.”

It has been 13 months since Rob’s death. Allison has received a tremendous career advancement as The Big Ten Network has hired her to be a reporter. The photo below is of her interviewing Michigan State head football coach Mark Dantonio after a recent game. Last month, on the one year anniversary of the accident, Allison wrote shared this incredible experience:

Today, we went out to the cemetery as a family, me, Emery, Sharon, Terry & Terri Beth. While we are standing in the pouring down rain, the sunset shines through the dark clouds and a beam of golden sunlight shines directly on Rob’s headstone. It was beautiful and glowing. And just as we are about to leave, a perfect complete rainbow forms over us, a double rainbow on each end! It was truly breathtaking! I have never believed in signs, but I can tell you that without doubt, I know that was him. It was electric! I can’t fully explain how it made us feel, but I am so glad that I shared it with his family. It is as if every tear shed this past year, lead us to that exact moment. We are going to be ok. 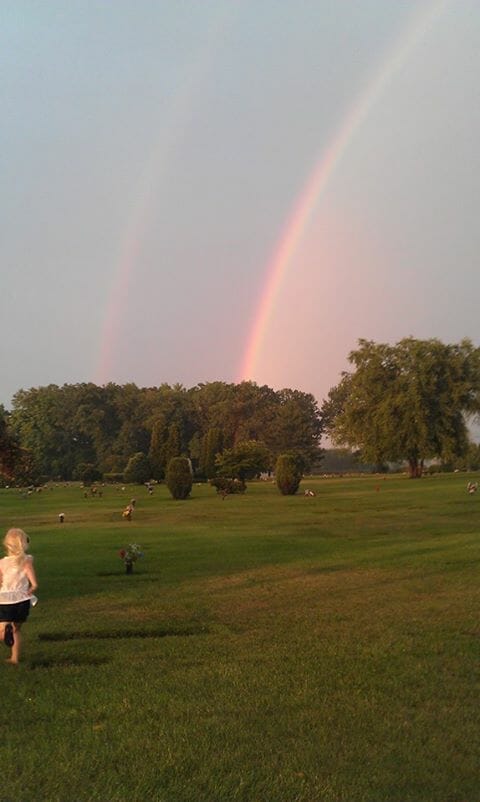 I asked her how Emery and her have moved forward.

“You just keep ……… going,” she said. “We just have. I have my daughter. We make sure we talk about him every day. We have video. I don’t want it to always be sad when we talk about him. We laugh a lot too at the memories. I do most of my crying when I am away from Emery.”

“There is no magic way to go forward,” she said. “You just do it one day at a time. It’s part of our life … who we are. We are all on a journey and this is part of our journey.”

Let’s help Allison and Emery make a difference by supporting this.

You can nominate someone by clicking here

Allison can be reached at

One Good Deed Michiana is on facebook by clicking here

They would like your nominations of people. They appreciate donations that they can give to people, like beauty products and ideas of things like what they got to Janet. They are currently planning the 3rd annual Freezer Memorial Golf Outing for the summer of 2014. Emery runs a lemonade stand at that event each year!

—Charlie Adams is the author of 4 books on positive attitude and peak performance, including 2013′s “How to Build a Positive Attitude and KEEP the Darn Thing!!” and “Stoke the Fire Within.” His books and motivational keynotes and seminars are designed to make sure events reach their objectives and to help create winning cultures. Email him at:Charlie@stokethefirewithin.com.