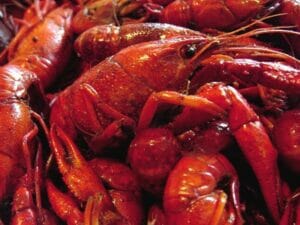 There was a time, not so long ago, when Cajun food could be found only in Louisiana, and most Americans who had never been to New Orleans had never tasted it. Now, thanks to chef Paul Prudhomme and modem media hoopla, blackened redfish threatens to become our national dish.  Everywhere you go in America, from California to New York, Louisiana restaurants have sprung up.  All this is great, since the food is outstanding, but it presents problems.  What wine, for example, do you drink with crawfish?

My rule in choosing wines to match foods has always been to go with informed tradition.  Find out what the local people who first cooked the dish like to drink with it.  By that system you end up drinking Italian wines with foods, French with French, and so on right down to the regions and towns where both the foods and wines originated and became wedded in taste over many generations.

Having lived in New Orleans, however and traveled the bayou country of south Louisiana, I knew that there was no such thing as Louisiana wine.  Even New Orleans, the city with the finest food in America (take that, New York), has never been known as a wine-drinkers’ meeca.

To review our prejudices, my wife and I traveled to the Cajun capital, Lafayette, for a refresher. We decided n Mulate’s in nearby Breaux Bridge after consultation with a bellman with a strong Cajun accent.  The alliterative quality of “Bro” Bridge, with its ethnic ring, won us over. Mulate’s was also said to have lively Cajun bands, and our daughters were along and wanted to dance. At real Cajun restaurants everyone dances together, from grandpas to 3-year-olds.

The exterior of Mulate’s looked promising. The door handle was carved to look like a giant shrimp, not to attract tourists but from real homey devotion to the idea. The large parking lot dispelled my fears of tourism, being filled exculsively with Louisiana license tags. Large, hand-painted signs out front accurately described the atmosphere inside.  The first said “Bon Manger, Bon Temps,” meaning “Good Eating, Good Times.”

The atmosphere of Mulate’s was what we had expected and hoped for-happy and lively without being raucous. The music helped, but sounded more Irish than French, the fiddles and old-time accordion giving it a sort of hypnotic, ancient effect as the evening wore on.

The Irish-bar feeling is not surprising. The Cajuns of Louisiana are descendants of the French-speaking Acadians of Canada, exiled to the swamps by the British. But the Acadians’ original home was Brittany, the Celtic part of France, so it is natural that their music still sounds oddly Gaelic despite its French words.

The biggest surprise at Mulate’s was the “Cajun” wine list. It was the only thing on the menu in English and featured Chardonnays and cabernets from Jordan and Fetzer Wineries of California and St. Michelle of Washington state, carafes of Robert Mondavi rose. In one sense they were typically Cajun: simple suited to the food, and excellent at four different price levels. There was not a French wine on the list -very American these French.

The menu was similar. There were few dishes, but all good and all fresh local specialties. Crawfish are only in season from January to June, so we laid aside the cuisses de quaouarons (frogs thighs) and bouchees de barbue (catfish bites) and got into huge plates of crawfish etoufee. Mulate’s did not over-spice the already spicy crawfish, and the accompanying sauce of onions and peppers was among the best I’ve tasted in years.  The word etoujee literally means “stuffed,” but in this case the term “smothered would be more accurate.

All the chardonnays won with this version of crawfish, the buttery Jordan being the best. This was something of an exception. For Cajun food my theory has been to order what you like to eat and drink inexpensive wines most of the foods are spicy. If you insist on making wine the centerpiece, then order the mildest thing on the menu, preferably not fried.

In a last-minute folly, we ordered a red-hot Cajun Andouille sausage, which was served with hot mustard on the side. The waitress rightly suggested that only beer would go with it and brought along a slice of lime to rub around the rim of the glass.  The lime sort of married the hot sausage with the cold beer. It was not a gimmick-it really served a purpose. No wonder the Cajuns are taking over the country.

-John Hailman of Oxford is a regular contributor to HottyToddy.com on two subjects: Law and Wine. Now retired from both his “day job” as a federal prosecutor in Oxford after 33 years and his “night job” of 25 years as a nationally syndicated daily columnist in more than 100 daily papers on wine, food and travel for Gannett News Service and the Washington Post, Hailman will cover both topics under the titles of The Legal Eagle and Wine Tips of the Week. HottyToddy.com will also run periodic excerpts from Hailman’s upcoming book of humorous legal stories: From Midnight to Guntown: True Crime Stories From A Federal Prosecutor in Mississippi. Hailman now teaches Federal Trial Practice and Law and Literature at Ole Miss.