Covered up: Not a referral to coats or sleep bedding. “Covered up” is synonymous with “swamped” or “up to my eyeballs” with too much work or a given situation. Like Interpol’s hotline after a terrorist attack.

Chances are, if you are NOT from around here, and you’re not Mediterranean (French, Italian, Greek, Turkish) or Caribbean, African, Asian, or Middle Eastern, your food world has never included eggplant. What a pity.

Eggplant was one of the more mundane and frequent culinary staples in my parents’ adventurous household. But boring? Never. It might not compare with grilled snake or barbecued cabrito, but eggplant is one of the most versatile of our local farm crops. And it really is exotic. And besides, it’s REALLY PRETTY.

Eggplants, which locally are in season from August through October, are a fruit in the nightshade family that includes tomatoes, sweet peppers, and potatoes. Eggplants, like their cousins, grow on vines that can extend several feet in height. They come in a rainbow of colors, and in numerous varieties and shapes, known as cherry type, egg-shaped, or oblong. Depending on type, eggplants range in size from tiny to 18 inches long.

The ancestors of modern eggplant grew wild in India; Chinese farmers in the 5th century BCE were the first to cultivate the fruit. The produce was introduced into Africa from the Far East, and then into Italy in the 14th century. (Think Eggplant Parmesan!) The Italian explorers spread the fruit throughout the Mediterranean, Europe and the Middle East. Eggplant was popular less as a food than as a decorative garden plant for most Europeans until 18th century horticulturists developed milder tasting varieties.

Eggplants have a characteristic astringent quality and spongy texture, and range in flavor from mild to bitter. It’s that bitter astringent quality that distances some would-be diners. The rule of thumb is that the larger the eggplant, the larger the seeds tend to be, and it’s the seeds that impart the bitterness to the surrounding flesh. These large eggplants, such as the traditional American purple-black variety, should be soaked, cut-up, in salted water, or salted before cooking to tenderize the flesh and to sweat out the astringents. Some of the newer varieties of purple and lavendar eggplant are bred to be more tender and less astringent in flavor, and don’t need the salt treatment. Eggplant skins are edible, but the large purple-black and white ones tend to have thicker, more bitter skins that work best as a “shell” when grilling or roasting.

Depending on the variety and how it’s prepared, eggplant can be served grilled as a stand-alone, pureed into a dip, or mixed into a casserole with other veggies, seafood, and meat. Eggplant provides a perfect “calming” complement to strong-flavored ingredients.

Eggplant is rich in phenolic compounds that function as antioxidants, primarily chlorogenic acid, one of the most potent free radicals in plant tissues that fight cancer and bad cholesterol. Eggplant also is a superb source for digestion-supportive fiber and bone-building manganese. It also contains a good amount of molybdenum, potassium, Vitamin K, B6, folate and niacin.

HOWEVER, like most nightshade plants, eggplant should be consumed in moderation. Eggplant contains measurable amounts of oxalates, which can crystallize and lead to health problems for people with kidney or gallbladder problems if regularly consumed in high quantities.

Eggplant also contains a higher concentrate of nicotine than any other edible plant. This means that consuming 20 pounds of eggplant equals the nicotine in one cigarette. Who knew. Who’s gonna eat that much of anything? Moussaka, Ratatouille, or Baba Ganoush, anyone?

Rules for Selecting and Preparing Eggplant 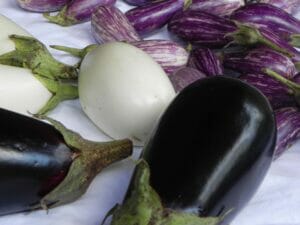 Choose eggplants that are smooth, shiny, firm, and heavy for their size. Test for freshness by pressing the skin with your thumb pad; it should spring back if still fresh and ripe.

Avoid eggplants with discolorations, scars, and bruises (they are highly perishable and these are indications of deterioration).

The stem and cap (calyx) should be bright green.

Avoid waxed eggplants; and unwrap plastic-wrapped eggplant as soon as possible because the fruit needs to breathe to postpone deterioration.

Place uncut and unwashed eggplant in a baggie and store in the fridge crisper at around 50˚F for no more than about 3 days.

NEVER cut eggplant with anything other than nonreactive stainless steel (never use carbon steel).

Prepare and cook eggplant in nonreactive dishes and pans (unseasoned cast iron, copper, and aluminum will cause eggplant to turn black).

Eggplant will begin to turn brown as soon as it is cut because of the phenolic acids; salt it or immerse it in salted water until cooking; the salt can be washed off.

With permission from Aileen Bost of Bost Farms, I tweaked her recipe for baked eggplant. It is an elegant side dish for company or family. Mrs. Bost shares the recipe at the Mid-Town Farmers’ Market in Oxford, where her family sells gorgeous Japanese eggplant (the long, purple-and-white mottled variety), white eggplants, and traditional American purple-black eggplant known as aubergine in Britain, France and the art world.

1 tsp dried basil (I use freeze-dried)

Rinse the eggplant, pat dry. Peel and cut slices about 1/4-inch thick. Lay the slices out on a cookie sheet on a paper towel. Sprinkle with the first salt. Allow to sit about 30 minutes until they “sweat.” Preheat oven to 450˚F. Spray a 9-by-12-inch casserole dish with nonstick cooking spray.

Spread eggplant slices evenly in the pan. Layer the tomatoes and onions over the eggplant slices. Drizzle with olive oil, and sprinkle with the second salt and basil. Loosely cover with foil and bake about 20 minutes.

Remove temporarily from oven; spread out mozzarella; sprinkle Parmesan on the mozzarella. Top with the breadcrumbs. Return to oven, uncovered, for 10-15 minutes, until cheeses melt and bubble. Remove from oven and allow to rest for five minutes. Cut slices with a spatula. YIELD: 12 servings.

I had forgotten about this terrific recipe that Dad copied many years ago from a friend in South Carolina. The casserole looks like a mushy mess, but tastes (and smells) divine. This dish also provides the perfect excuse for repurposing leftovers such as those last slivers of about-to-expire deli ham, and bits of stale bakery baguettes. Try making your buttered breadcrumbs from a loaf of stale Kroger bakery “all things” French bread containing onion, garlic, butter and sesame seed topping. Yum.

3 ripe, medium tomatoes, peeled, seeded, chopped and drained (or a 28-oz can of chopped tomatoes, drained)

Preheat oven to 350˚F. Combine first salt and cold water, stirring to dissolve the salt. Soak eggplant chunks in salt water for about 20 minutes. (The salt water extracts the bitterness.) Drain and place chunks in a medium saucepan. Fill with water just to cover; bring to a simmer and cook until tender, about 15 minutes. Drain in a colander. Sauté the onions and bell pepper in 2 T butter. Add the eggplant and toss gently. Mix in the plain breadcrumbs, salt, pepper, Worcestershire, ham, and tomatoes in this order. Toss gently after each addition to mix.

Ladle into an 8-inch deep casserole dish sprayed with nonstick cooking spray. Top the casserole with homemade, grated and buttered breadcrumbs. Randomly punch holes in the crumb topping with a fork, penetrating down to the eggplant layer. Bake about 30 to 40 minutes, or until breadcrumbs are golden brown and casserole starts to bubble. Remove from oven long enough to sprinkle grated cheese on top. Continue baking about 5-10 more minutes, until cheese melts. Serve with steamed rice while hot. YIELD: About 6 to 8 servings. 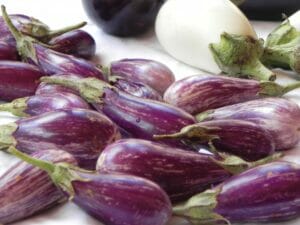 At the Oxford City Market this past week, Tubby Creek Farm was selling tiny Japanese eggplants known as the Fairy Tale variety. Fairy Tale eggplants have tender purple-mottled white skins and no bitterness. Enchanted, I played around and came up with this appetizer inspired by stuffed mushrooms. I used marinated, roasted peppers from the grocery store salad bar, and also chopped canned, roasted pecans.

Preheat oven to 350˚F. Wash and dry the eggplant. Cut off the calyx (stems) and slice lengthwise in half. Place cut-side down in an oven broiler pan. Add about 1/4 inch water to the pan. Place pan in preheated oven and bake about 15-20 minutes, until the eggplants are tender and the skins are brown. While the eggplants are baking, combine the feta, chopped roasted peppers, and chopped pecans.

Remove pan from oven and ladle eggplants cut-side down onto paper towels to drain. Wash pan, dry, and set it aside. Use a teaspoon to scoop the eggplant from the skins and loosely chop. Stir chopped eggplant into the pepper-cheese-nut mixture. Mix in pepper.

Stuff each eggplant skin with a rounded teaspoon of filling. Place the stuffed eggplants into the broiler pan. Ladle any leftover filling into a ramekin, and bake to serve as a hot dip.