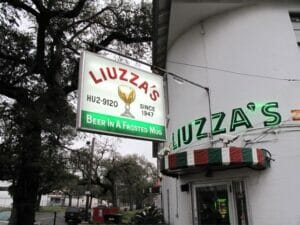 Less than five months after Hurricane Katrina devastated most of New Orleans, legendary football coach Jim Carmody, his friend Bruce Howe and I – all New Orleans natives – returned to our city to survey the damage.  We wanted to check out the damage Katrina had done to our respective archrival high schools. Jim graduated from Holy Cross, Bruce from Warren Easton (the high school Lee Harvey Oswald briefly attended in 1955 when he lived in New Orleans) and I graduated from Jesuit.  We also wanted to visit three legendary New Orleans restaurants and bars: The Rivershack Tavern (one of my old neighborhood favorites). Liuzza’s and Parkway Bakery (favorites of all three of us).

Driving into the city from the west on I-10 the city looked like a field of blue tarps covering nearly every roof of nearly every building. We left the interstate to drive to my old house in Jefferson Parish and The Rivershack Tavern and found little or no damage. We drove around Jesuit on Carrolton Avenue and observed high water lines on every home from the floods that nearly wiped out the city.  Jesuit was the first school to re-open in New Orleans after the storm. After driving around Bruce’s old high school on Canal Street we decided to see if one of our favorite restaurants, Liuzza’s, was open before going to the devastated Lower Ninth Ward where Holy Cross was located.

Liuzza’s is located outside the French Quarter in the Mid-City section of New Orleans on Bienville between Carrolton Avenue and Jefferson Davis Parkway. The restaurant and bar had become a neighborhood fixture and local favorite since it opened in 1947.  The sign outside the restaurant features a gigantic frosted mug of beer and invites one to “Taste Real New Orleans.” The three of us remembered the white-washed building that offered a combination of some of the finest Cajun, Italian, seafood and Louisiana dishes one could find, anywhere.  When you entered you found yourself in a small bar featuring several wide screen televisions and game machines. The stools lining the bar were usually filled with locals having one of Liuzza’s trademarks – a huge frosted mug full of Coors or Abita beer or root beer.  The smell of the food was captivating. The choices offered on the menu were staggering and included the usual staple of fried shrimp and oysters – either plates or poor boys, a number of poor boy choices – including a French fry poor boy, okra gumbo, homemade soups with their turtle soup being a feature, lasagna and seafood pastas, red beans and rice, Italian sausage and meatballs, and fried green tomatoes.  Their fried onion rings are the best I have ever had. If one was lucky he or she might catch some of the specials of the day such as crawfish and grits, shrimp merliton etoufee, eggplant casserole, a shrimp, corn and okra stew, or their shrimp and squash Creole.  Liuzza’s pride and joy is the Frenchalleta – their French bread version of the New Orleans traditional mufalleta sandwich.

Oh, the great food was a distant memory when we pulled up to the restaurant  surrounded by houses with watermarks 6-feet high. The floodwaters nearly reached the top of the doors. There is a famous photograph of a man in a motorboat passing by Liuzza’s when the water was halfway up the building. We got out of the car to get a look at the damage inside. We thought the place was abandoned but when we entered we saw one of the owners, Michael Bordelon, working alone trying to restore the restaurant.  We introduced ourselves and asked if we could come in and take some photos. “Come on in,” Michael said, “but there’s not much to see.”  I asked him when he thought he would re-open and he turned to me with tears in his eyes and said, “Man, I am trying to do the best I can.”  I thought I detected tears in all of our eyes. We then went to eat at Parkway Bakery – but that is another blog.

We next went to see the damage to Jim’s alma mater in the lower Ninth Ward.  The entire lower Ninth Ward was devastated by the waters that topped the Industrial Canal – including Holy Cross, located adjacent to the levee of the Mississippi River. Jim was stunned.  The three of us climbed the levee and looked back on the damage.  In all the time Jim attended Holy Cross he had never been to the top of the levee because to do so while he was a student there would have surely resulted in his expulsion. Looking back on the leveled Ninth Ward in one direction and the skyline of the destroyed Crescent City was gut wrenching. The school would never re-open there but moved to a new location in the Seventh Ward. There was a deafening silence in the car on our way back home.

Michael Bordelon must have done the best he could.  The restaurant has long since re-opened and seems to be identical with the restaurant I remembered growing up.  A visit to Liuzza’s is definitely worth the trip.

A New Orleans native, Ron Borne is a medicinal chemist by experience, and an amateur writer by avocation.  He served Ole Miss and the School of Pharmacy as a teacher, researcher and administrator for more than 40 years and is now “retired” and living in his center of the universe. Email him at  rfborne@yahoo.com.