They Said to Wear Navy 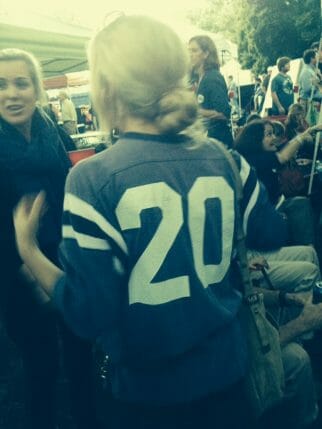 Mike Dennis was an All-SEC running back for two seasons under John Vaught and played on the 1963 SEC championship team. He was also leading rusher for the 1965 Rebels before entering the NFL to play with the Los Angeles Rams.

He’s now retired to Oxford from his Jackson dental practice and enjoys tailgating with his sons, physicians Jeff and Michael and their families, including Jeff’s wife Jessica (Yoste) Dennis, in the Circle. When the color code for a home game is navy, Jessica (pictured at left before the Texas A&M game) proudly sports her father-in-law’s faded navy Ole Miss No. 20 jersey.

Who makes ol’ No. 20 look better? We have to give the nod to Jessica. We’re sure Mike would agree.

Facebook
Twitter
Pinterest
Previous article
George Porter, Jr.: Funk Royalty Returns to Proud Larrys’
Next article
What Rebels Must Do to Have Upset Shot Against No. 6 LSU