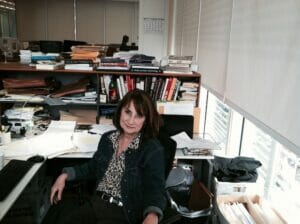 From the City of Oxford to New York City, meet Stephanie Saul. The Ole Miss alumnus is currently a domestic correspondent for The New York Times. Before her job with The Times, Saul worked at The Clarion-Ledger in Jackson, Miss., The Plain Dealer in Cleveland, Ohio and the Long Island newspaper Newsday. During her time in Long Island, Saul worked on a series about disability pensions by Long Island police with another Newsday reporter, Brian Donovan.  Their stories won the 1995 Pulitzer Prize for Investigative Reporting.

Hotty Toddy: How did you end up at Ole Miss?

Saul: I always wanted to go to Ole Miss. It was one of two or three places I applied to.

Hotty Toddy: Were you studying journalism?

Saul: I was initially a pre-med student. I didn’t think about journalism as a career, I really liked it as a hobby. It was one of those things where I just kept doing it.

Hotty Toddy: What’s one of your favorite memories from your time at Ole Miss?

Saul: Most of my good memories come from working at the Daily Mississippian. A lot of fond memories of staying late.

Hotty Toddy: If you could tell your freshman self something, what would you tell her?

Saul: Oh gosh, I would say that, first of all, journalism is not a profession that you do halfheartedly. You have to be all in and really love it, because sometimes you’re called to do something you wouldn’t normally want to do.

Hotty Toddy: Do you have any advice for journalism students?

Saul: Don’t waste your electives. Take history, political science and literature because the study of journalism doesn’t prepare you for all that you need, but some things you can teach yourself. It would also be helpful to learn a foreign language like Chinese or Arabic.

Hotty Toddy: Any advice for soon-to-be-grads?

Saul: Graduating with a degree isn’t a job. You need clips and tapes, and if you’re going into print you need to be working for student publications or during the summer as an intern.

Hotty Toddy: You won a Pulitzer Prize in 1995. What was that project on?

Saul: At that time, police in the state of New York could retire with 3/4 disability and a number of police officers put on disability were not actually disabled.

Hotty Toddy: How did they get away with cheating the system?

Saul: Some had finger injuries, some slipped and fell. One actually slipped on apple sauce and another on a paper towel. One guy got out on a knee injury and was working as a lifeguard at Jones’ Beach. He passed the rigorous life guard test every year, but he claimed to the police department that he had a leg injury that disabled him from the job.

Hotty Toddy: How often did people get away with this?

Saul: The disabilities records were not public, so we had to use court documents and follow the former officers to find out what their daily activities were. We tracked down a number of people doing this kind of manual work, but received millions in disabilities.

Hotty Toddy: Where do you see yourself 10 years from now?

Disturbance at Oxford Business Leads to Arrest of Myrtle Man