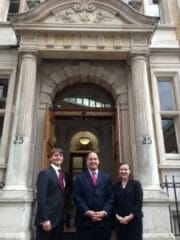 You’ve heard of the British invasion? Maybe you didn’t know about the Rebel invasion of London led by three Ole Miss accountants. These talented number crunchers are three members of a Jackson, Miss., tax firm, Butler, Snow, O’Mara, Stevens & Cannada PLLC, who opened the outfit’s 13th office and first international office in London this past summer.

Among the members of the Butler Snow International Tax Team sent to London are three University of Mississippi accounting school graduates. Brad Westerfield, Kurt Rademacher, and Samantha Moore. All three Rebels were raised in Mississippi and all received multiple Ole Miss degrees.

“At the University of Mississippi, we take great joy in the success of our graduates,” Provost and Vice Chancellor of Academic Affairs Morris Stocks said. “It is rewarding to see young men and women from Mississippi making a significant international impact. They are models to our current and future students.”

Rademacher and Westerfield previously worked for British law firms specializing in international tax for the majority of their careers before joining Butler Snow. Westerfield lives and works in London full-time, while Rademacher splits his time between Jackson and London. Moore primarily works from the Jackson office, but spends a few weeks each year in London.

For the past two years, this group of Rebels was nominated for the prestigious STEP award for the North American Team of the year. That made them the logical choice to be sent to head-up the London office, according to Barry Cannada, the firm’s business department chair.

Rademacher, Westerfield, and Moore currently represent and advise clients from all over Europe, the Mid-East, and Asia, including ultra affluent customers listed in the Forbes top 1,000 wealthiest people list. Experienced in both U.S. and U.K. tax systems, the London team works with local counsel in their clients’ home areas to provide advice that achieves their specific tax objectives.

— You can email Kate at kate.sinervo@hottytoddy.com