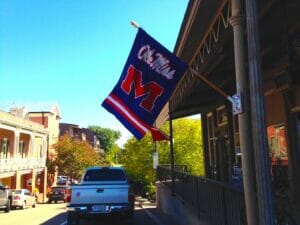 Homecoming weekend in Oxford means big bucks for businesses on the Square. People from all over make the trek to Oxford to take in the sights and happenings of Ole Miss Homecoming. However, if you’re a Rebel fan hoping to score big on good deals this weekend, you might be out of luck.

“We aren’t having any Homecoming specials,” said Buck Walden, owner of Rib Cage. “This is really a great time for us to make good money. The crowd will be great and it should be a really awesome weekend for businesses on the Square.”

Most people on and around the Square aren’t expecting the crowds to be quite as large as previous game day weekends against Texas A &M and LSU, but Homecoming weekend always brings a big group of Ole Miss supporters.

“The crowd won’t be as big as the previous games,” said Mary Allyn Hedges of Visit Oxford. “But we will see a lot of alumni. They always tend to come back and support the team and the community.”

And businesses know the alumni come in ready to spend.

“The main reason we won’t be having any drink specials is because Homecoming weekend brings in a big crowd on its own,” said Jake Fondren, bartender at the Burgundy Room.  “It’s a big money making time for all businesses on the Square.  People come in and out from place to place and spend money.”

Homecoming weekend does offer some free or low-cost entertainment; however. There will be Double Decker Bus Tours around the city on Friday. A Homecoming parade and pep rally will take place on Friday as well.

“I’m not really concerned that there aren’t any special on the Square,” said Nicole Bounds, a junior at Ole Miss. “I come out to have a good time and be around fellow Rebel fans.”