Events For All Rebels During Homecoming Week 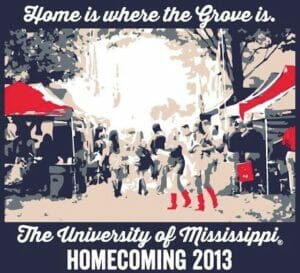 Saturday’s home football game against Idaho is not the only event for Ole Miss Homecoming festivities. The rest of the week features activities that bring together students, alumni and residents of Oxford.

The Student Activities Association’s (SAA) Special Events committee has been working hard to provide students with plenty of fun in front of the Student Union.

Earlier in the week, events included a mechanical bull, a dunk tank and Union Unplugged. Amber Graham, committee member of the SAA, said Rebels Got Talent and bungie jumping will also be part of the action, and Homecoming t-shirts are being sold for $10 at a table inside the Union. For more on the SAA’s homecoming events check out their Facebook page.

At the root of Homecoming is, of course alumni, returning to their alma mater. “In older days, Homecoming was a bigger deal for some alums who truly just came back to campus once a year,” said Tim Walsh, executive director of the Alumni Association. “But those days are over for ones who love football.”

Despite this change, the Alumni Association still holds events for returning alumni. Between Thursday afternoon and Saturday afternoon, selected alumni will be honored as the new inductees to the Ole Miss Alumni Hall of Fame. Those being honored this year include Outstanding Young Alumni Award winner Lucy P. Priddy of Vicksburg, Alumni Service Award winner Jan Griffin Farrington of Ridgeland and those being inducted into the Hall of Fame are: Haley Barbour of Yazoo City; David W. Houston III of Aberdeen; Dick Molpus of Jackson; Carol Ross of Oakland; and Stephanie Saul of Port Washington, NY. If you buy tickets to the special event on Friday, there is a cocktail reception at 6 p.m., followed by dinner at 7 in the ballroom at the Inn at Ole Miss.

“It’s a great way to remind all of us of the incredible things our graduates are doing all over the world, both young and old and throughout all sorts of fields,” Walsh said. “It’s probably the highlight of our year.”

As an Ole Miss alumnus himself, Walsh says that the event touches him.

“Every year there seems to be one or more recipients who gets a little emotional during the ceremony. I always seem to catch myself choking up in the audience, watching the remarks from the podium.”

The Hall of Fame induction is not the only alumni event on campus. Julian Gilner, assistant director of alumni affairs said, “We have a lot of affinity reunions.”

This year the Alumni Association will be holding its second Homecoming Queen reunion. This reunion is for all former Ole Miss Homecoming Queens to come together and socialize. The first reunion was held 3 years ago and had an amazing turnout with almost all living queens in attendance. Each former queen gets a sash with their year on it and group pictures are taken. Last reunion, money was raised to buy a scepter for the reigning queen to carry.

The Rebelette alumnae will also hold a reunion, complete with a Grove tent in front of the Alumni Center to raise money for the current Rebelette scholarships.

And even if you never went to Ole Miss, don’t forget about the traditional Homecoming parade, which begins in the Circle at 5 p.m. on Friday and will end on the Square.

Following the parade, the second annual Square Jam will take place from 6:30 to 7:30 p.m. on the Square. According to the Ole Miss Sports’ website, “The men’s and women’s basketball teams will participate in a variety of drills and skills competitions to unofficially kick off the start of the season.”