Commitment – 2 Powerful Examples of What it Means

When speaking on attitude or peak performances, sometimes organizations will ask me to put an emphasis on commitment. I will share two stories with you this week that will both have a lasting impact.

One of the most inspiring stories I know about commitment is one of the legendary love between John and Nellie Wooden.

Many motivational books have been written on Wooden, the legendary UCLA basketball coach who led them to ten national championships. His Pyramid of Success has been used as a model by many companies.

But to me, what was more impressive was his love for his wife Nellie, who he was married to for almost 53 years (photo below) 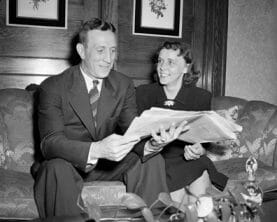 They met at a country carnival while early in high school back in the 1920’s in their home state of Indiana. They were classmates at Martinsville (Indiana) High School. John played basketball and Nellie played the cornet in the school band. They were together constantly from then on. John always said Nellie was the only girl he ever kissed in his life.

In the book ‘They Call Me Coach’ author Jack Tobin writes that Nellie and John’s plans for getting married on August 8, 1932 in Indianapolis in a little church were severely challenged when two days before their wedding, the bank where they had their savings ($909.05) went broke and closed.

They were very sad but the father of Nellie’s best friend loaned them $200 so they could be married. John’s brother drove them to Indianapolis and stood up for them.

John and Nellie had dinner after their wedding ceremony at the Bamboo Inn and went to the Circle theater to hear the Mills Brothers.

They were together from then on until her death at the age of 73 on March 21, 1985 after a long illness. John was at her side when she died. They had 2 children, 7 grandchildren, and 13 great-grandchildren. 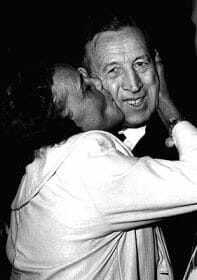 While he kept busy sharing his motivational messages and writing books, he missed her terribly. From 1985 until his death in 2010 at the age of 99, John would sit down on the 21st of each month and write a letter to Nellie. Rick Reilly wrote more in a wonderful column for Sports Illustrated:

‘He’ll say how much he misses her and loves her and can’t wait to see her again. Then he’ll fold it once, slide it in a little envelope and walk into his bedroom. He’ll go to the stack of love letters sitting there on her pillow, untie the yellow ribbon, place the new one on top and tie the ribbon again.

The stack would grow to be hundreds of letters high. In her memory, he sleeps only on his half of the bed, only on his pillow, only on top of the sheets, never between, with just the old bedspread they shared to keep him warm.’

“Another old-school quality that I have chosen to maintain is the fact that I am a one-woman man. Nellie and I were married for 53 years. I’ve never been with another woman. When she died two decades ago, I decided to remain loyal. I was loyal to her in life, and I will remain loyal to her memory until we are forever together again.”

John would live 25 years after Nellie passed away in his condo near Los Angeles. “I’m not afraid to die,” he would tell friends. “Death is my only chance to be with her again.”

In Steve Jamison’s book ‘Wooden: A Lifetime of Observations and Reflections On and Off the Court,’ he shared their approach:

“Love means many things,” he said. “It means giving. It means sharing. It means forgiving. It means understanding. It means being patient. It means learning. And you must always consider the other side, the other person. You can give without loving, but you cannot love without giving … I agree with Abraham Lincoln. He once said that the best thing a man can do for his children is to love their mother.”

“Life is a united effort of many. My life has been inspired from my youthful days in high school, through university, and into my coaching career by one person — my late wife, Nellie. Together we survived many trials, many misunderstandings, many separations; together for over 52 years, we weathered the Great Depression of the ’30s with few material possessions and shared in the innumerable joys, fears, such as World War II, a miscarriage, and disappointments that cross every life. Whatever problems arose — and there were many in the life of a teacher/coach — Nellie was always beside me …” – John Wooden

What a wonderful story about commitment.

The other story I have shared in inspirational keynotes about commitment that has connected with audiences from Curacao to Chicago to Juneau is the story of Pass Right. Whether you have time right now in the office or at your school, or whether it is later today, I encourage you to watch this inspiring story of what commitment really means.

It happened in 2005. A dying boy asked the Notre Dame football team to pass the ball right the first time they got the ball in their next game at the University of Washington.

However, when they got the ball, they were backed up within feet of their own goal line. Would they honor their commitment?

—Charlie Adams is a 1985 graduate of Ole Miss and is a native of Oxford. He is also the author of 4 books on positive attitude and peak performance, including 2013′s “How to Build a Positive Attitude and KEEP the Darn Thing!!” and “Stoke the Fire Within.” His books and motivational keynotes and seminars are designed to make sure events reach their objectives and to help create winning cultures. Email him at:Charlie@stokethefirewithin.com.