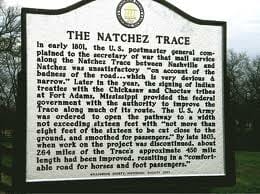 The Natchez Trace began its life as a game trail, a path trekked out by deer and buffalo walking through the dense woods. Later use by Native Americans widened the track and by the time of early white exploration it was well known. President Thomas Jefferson wished to gain from its use and pushed to call it the “Columbian Highway.” By 1809, after the U.S. Army’s improvements, it was passable for wagons. Taverns, inns and trading posts, known in those days as stands, sprang up on the Trace.