John Hailman’s From Midnight to Guntown: The Nation of Islam Comes to Greenville 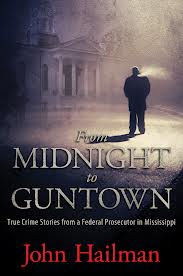 Peacelover Shabazz, known as Percy Walker before joining the nation of Islam, was the first bank robber I ever tried, right after I joined the U.S. Attorney’s office.  Al Moreton handled the case, but let me sit at counsel table to learn the ropes.  The characters were something else.  The defendant had a shaved head and sat up totally straight and immobile the whole time.  He looked like the character from old Mr. Clean commercials.  Like most converts, Shabazz was more fervent in his religion than someone raised in it.  As my father used to say, “There’s no prude like a reformed whore.” Shabazz demanded a Muslim attorney.

Fortunately, a Muslim attorney had just graduated from Ole Miss, which was under pressure to admit minorities.  Although his English was a little spotty, thanks to the state university diploma privilege Iraqi immigrant Aqbar Deedeedar was admitted to the bar automatically without taking any bar exam.  Aqbar was a gentleman with formal manners, calling everyone “Sir,” even those who treated him as an unwanted foreigner and called him by the “N” word behind his back.  His style of practicing law was as exotic as his appearance.  He hung out a shingle in Greenville.  He did not type and wrote his legal pleadings in longhand.  Being used to Arabic script, which is highly stylized, his handwriting was a work of art, more like calligraphy than handwriting.

Aqbar could not afford a vehicle and since court hearings in criminal cases were held in Oxford where the U.S. Marshal, Probation Officer and U.S. Attorney all had their offices, Aqbar was obliged to ride to court by Greyhound bus.  To protect Mr. Shabazz’s right to counsel, the judge had to tailor his court schedule to fit Greyhound bus schedules between Greenville and Oxford.  Thanks to the exquisite courtesy and seriousness of Mr. Deedeedar, however, things went smoothly in the case despite the bizarre behavior of defendant Shabazz.  At the end everyone thought Mr. Shabazz received a fair trial, despite his unusual counsel and even more unusual examining psychiatrist, Dr. Harry Fain.  Dr. Fain flip-flopped from first saying Shabazz was a psychotic paranoid schizophrenic to his final opinion that Shabazz was a sane “normal” bank robber who merely acted peculiar due to excessive religious zeal.

The investigation began with a wild outburst by Shabazz who was apprehended dancing naked on top of his new Cadillac in the middle of highway 61, the old Blues highway just north of Delta State University.  Shabazz had heard on his car radio that the leader of his faith, the Honorable Elijah Muhammad, had just died.  Beside himself with grief, Shabazz was desperate to express his emotions.  At the time the arresting officers had no idea Shabazz had robbed a bank.  It took a thorough and insightful FBI investigation by veteran agent John Neelley to put it all together.

Back on December 10, 1974, the Commercial National Bank in Greenville a teller saw a lone black male approach the bank:  “He had a green ski mask on his head, but not pulled down.  There was hair sticking way out where the eyes are supposed to be.”  The teller told the others:  “Hey y’all, here comes the Easter Bunny.” The man stopped at the door, drew the ski mask down over his face, pulled out a revolver and shoved it in the manager’s face and told him to stand up. The manager heard the robber cock the pistol as he walked up to his desk.  The robber pulled out a white cloth bag and told them to put the money in it.  He kept telling them to hurry up or he would “blow their heads through the ceiling.”  The tellers noted the robber “was very calm and in complete control of the situation.  Everything he said was clear and distinct and easily audible.”  The robber got away clean with over $47,000.00.  No clues to his identity were found until two months later.

On February 14, 1975, officer Nassar of the Shelby Police Department was on routine patrol.  “Right in the middle of town, going south on Highway 61,” he met a dark blue Cadillac pulling a U-Haul trailer.  “It was blowing its horn.”  Nassar made a U-turn “to see if he was trying to flag him down or having trouble.”  When Nassar caught up with the car, it was stopped “right in the middle of the road.  The defendant was yelling, trying to get the other occupants out of the car.”  The driver “got up on top of the car and started to jump up and down on the roof.  He had stripped to the waist and had only his trousers on.  When another motorist tried to pass, he swung his big belt buckle and shattered their windshield.”

Officer Nassar told the Sheriff’s Office he “had a man stopped that looked drunk or on drugs or something.”  When Deputy Ello Wren arrived the defendant had stripped completely naked and was lying face down on an oriental-type praying rug.  He walked around naked for a while, then got on top of deputy Wren’s car in a squatting kind of mood, like he was fixing to stomp his car.”  The deputy told him to get down off the car, but “he just grinned and kept on.”

Officer Nassar finally waved his shotgun at the man and told him, “You have showed out long enough, now get down from there.  The man didn’t say a thing, just came right off the car, didn’t give a bit of trouble.”  The defendant “opened the tailgate of his U-Haul-It trailer and started rummaging through it.”  Nassar hollered at Wren, “You need to stop him.  Maybe he has a gun.  I don’t know what he is looking for.”  Deputy Wren told the defendant “You’d better stop it or the white man here is fixing to stop you.”  The defendant kept referring to officer Nassar, a Lebanese-American, as “the white man” and Deputy Wren “Black Brother.”

Shabazz was charged with resisting arrest.  In inventorying the contents of the handbag of his wife, a deputy found she had the sawed-off barrel of a shotgun in her purse.  She also had a newspaper clipping of the bank robbery in Greenville in December 1974 and a drawing of the bank.

Following the indictment of Shabazz for the bank robbery, attorney Deedeedar filed a motion for psychiatric examination.  The psychiatrist’s report to the court said defendant was neither competent to stand trial nor responsible for his actions during the robbery “in the absence of overwhelming testimony of more proximal witnesses.”  At the hearing on his sanity, Shabazz vigorously challenged the finding of incompetency and tried to demonstrate he was competent to stand trial.  The court eventually so ruled, over the objection of attorney Deedeedar.

At trial a bank customer identified the defendant as “fitting the image of his recollection.” The head teller, who had first called him the Easter Bunny, was also positive.  “I know that man when I see him.  I have nightmares about it.  I can still see him now.”  Another teller, who saw the robber before he pulled his mask down, testified “That is the nose I saw that day – the eyes, the ears, the face, the cheeks. He fits the description all the way along every part.”  When pressed on cross-examination she testified; “I feel sure if I could hear him talk I would know for sure.”  After the defendant was directed to speak, she said “I feel you are him.”

A Justice of the Peace testified that a writ for collection for unpaid rent was served on the defendant in Greenville the day before the robbery and that the overdue rent plus costs were paid to him just two days after the robbery.  Receipts in the wife’s purse showed expenditures for the month after the robbery of over $28,000.00.  None of the $46,000 taken in the robbery was recovered.  Other evidence showed that in January 1975, in Detroit, the defendant paid cash for a TV set, had substantial work done on the 1973 Cadillac he was arrested in and paid cash for the purchase of a house in Kansas City.

The defendant called his wife as a witness; she testified he was at home with her on the day of the robbery and that their expenditures were all from funds provided by a Temple of the Nation of Islam in Kansas City.  She said the diagram in her purse was planted there by police along with the newspaper clipping about the robbery.  The defendant then called Dr. Harry Fain, the examining federal psychiatrist, who testified as to his initial evaluation of defendant, saying that he had given him only a tentative diagnosis of paranoid schizophrenia at the time of the robbery.  His first report was qualified, however, by a lack of serious information from “proximal” witnesses and based almost entirely on the fact that he appeared so disturbed when he came in and because of the grandiosity of his religious claims.  “Crazy people often think they’re Jesus,” Dr. Fain testified.  With the additional information available to him from the evidence at trial, Dr. Fain dramatically reversed his opinion and testified defendant was sane and he could “find no reason to believe defendant lacked the capacity to appreciate the wrongfulness of his conduct, and that he could have conformed his conduct to the requirements of law.”  He concluded that “most significant was his refusal to take the MMPI [Minnesota Multiphasic Personality Inventory] test which is specifically designed to detect malingering, or faking.”