Lady Rebels Come Alive in Second Half to Down Jacksonville State 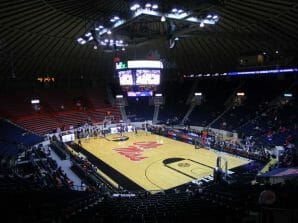 The Matt Insell era officially tipped off on the court Friday night in Tad Smith Coliseum. It may have not gone exactly like Coach Insell wanted but the Lady Rebs picked up an 83-62 victory after an explosive second half.

The first half of the game was extremely sluggish and the Lady Rebels only managed to score 24 points while shooting 8-41 field goals, 0-11 from 3 point land and only made 8-23 free throws. It was, in a word, ugly. Jacksonville State may have had a 35-24 lead going into halftime but they also played sluggish shooting 13-36 field goals and making only 7-18 free throws.

The second half was a completely different story however as the Lady Rebels came out and lit up the score board. Ole Miss’ shooting improved dramatically as they shot 24-39, 3-7 from behind the arc and then 8-12 at the free throw line. In the end, the Lady Rebs put up an astounding 59 points in the second half to seal the deal on a 1-0 start to the season.

The Rebels had three players finish with double digit points. Junior forward Tia Faleru lead the team in scoring with 18 points. She also had 10 rebounds which gave her a double double on the night. Senior point guard Valencia McFarland had 15 points and led the team in steals with four. McFarland didn’t score at all in the first half. Immediately after the second half began though, she drained a bucket, got her first points and never looked back. Diara Moore, senior guard, finished the the night with 11 points.

Head Basketball Coach Matt Insell said after the game that “It was a tale of two halves.” Insell has said he preaches effort and consistency every day in practice and meetings with his players. The first half may have been ugly but he was pleased with the effort his team gave in the second half.

“We came out in the second half, and it was all about our effort. I’m very happy to get this first win under our belts,” Insell said.

The victory Friday night gives Ole Miss it’s sixth consecutive win in a season opener. The Lady Rebels will be back in action Sunday (Nov. 10) at Tad Smith Coliseum to take on Central Arkansas. Tip-off is at 2 p.m.

–You can email Justin at justin.taylor@hottytoddy.com