The remarkable attitude of Terry Klarich – A blind single parent

Terry Klarich spoke after me at a recent conference in Tulsa, Oklahoma where the Dept. of Rehabilitation Services brought me in to speak on the power of attitude and how it impacts customer service.

Terry is blind. That hasn’t stopped him from raising three girls, being a valuable employee as a system analyst at the energy company ONEOK or from wood working on the side. He just finished a four poster bed for a client. He also has a sail boat.

Like many of the people I have studied over the years who have built and kept a positive attitude, Terry utilizes humor. With his guide dog Virgil by his side, he opened his Talk by saying one time a lady approached both of them and blurted out, “Is that one of those blind dogs?”

Without missing a beat, Terry replied, “Ma’am, if it is, he and I are both in trouble!”

He talked about how he doesn’t have any lights on in his wood shop at night. He joked how a neighbor came over and said there were no lights on. “I’m blind,” Terry said. “Don’t need them.” The neighbor replied: “Well, I am turning them on….because it makes ME feel better!”

Terry actually found humor in making his way to the podium after being introduced. His dog got him close, but as he slowly stepped towards it he bonked into it!

Terry was born two months premature back in 1963. He said back then they didn’t know a lot about taking care of premature babies. Babies eyes aren’t meant to be exposed to oxygen until birth. Doctors were so concerned with keeping him alive that by putting him something with oxygen, which damaged his eyes greatly.

He could see to a degree up until his teens when he had to stop doing things his friends could do easily. One of the things I speak about is the solution centered attitude. When Terry realized he wouldn’t be able to drive, his solution was this:

“I got a girlfriend that had a car.”

During his college days they didn’t have books in electronic form, so he would have to hire someone to read for him. He would take a tape recorder to class and hope the batteries would last.

“I owe everything that I am to my mother Mitzie,” he said with conviction. “She didn’t cut me any slack. One time it was my time to clean the bathroom. I said I couldn’t because I was blind. I said it to be lazy.”

“I ended up cleaning the bathroom.”

Terry then said something I think is very important.

“Helping someone is good,” he said. “But doing for someone is not, in my opinion.”

She raised me with a find a way attitude,” he said. “We had a pool where the kids would jump from our roof into the pool. I know she cringed when I did it but she didn’t stop me. I know she spent a lot of time on her knees. Another thing she did was say that she didn’t want me to look blind. I had this habit where since I couldn’t see faces I didn’t see the point of looking at the person speaking to me. If she saw me not looking at them, she would kick me under the table.”

“Of course after being hard with me … now she is a real softy with my kids!” 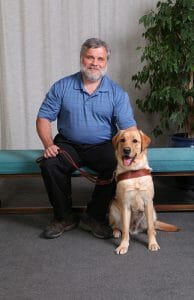 Terry admitted his first marriage was not good. “I got married in 1990 and had three girls,” he said. “That marriage did not work out. Huge custody battle. I don’t know how many depositions I went to. Imagine, a blind guy getting custody of his girls. I did. The Department of Human Services came out to see if I could take care of them. They saw how I had all the food organized. The guy said, ‘Make them a meal.’ He watched as I made spaghetti, green beans and garlic bread.”

Terry got married again and was very much in love with Cheryl. One day he and his wife were sailing competitively when she became very tired after the first race. Exhausted after the second they forfeited the third. Cheryl went to the car and sat there as Terry broke down the sailboat. When he got to the car she was crying on the phone while talking with his mom, a nurse. Cheryl described her yellowish eyes and skin and was told by Mitzie to get to the hospital. There they found it was pancreatic cancer.

“She lived about a year,” Terry said. “The company I work for, ONEOK, let me work from home for the final two months. We had been saving for awhile for that sailboat. I wanted to name it after her. She said no. She told me I need to get on with my life. So I thought about how we both loved to listen to the blues and we liked the song Misty Blue. I named the boat Misty Blue because blue was her favorite color and that was my way of honoring her without using her name like she wanted … ”

Cheryl has been gone since April of 2012.

Terry talked about searching for and getting jobs over the years.

“I would submit resumes and never mention I was blind,” he said. “I wouldn’t want to apologize for being blind. One thing I do in interviews is explain how I will get to work and get around, even though that is not a legal question for them to ask. I just make sure they know so it will ease their mind. As someone with a disability you have to be better than those with abilities. No one said life would be fair. I have worked hard. The IT world here in Tulsa is pretty small. I have built such a reputation that I could get a job anywhere here in it.”

“I would never have considered disability,” Terry said. “My mother would have killed me.”

After speaking in Tulsa and hearing him speak after me at the conference, I called him up when I got back to my home of South Bend to tell him he would be the subject of my Tuesday newsletter. I then asked how he was able to sail.

“There’s no way I could do it by myself,” he said. “I need someone to steer but when I am at the wheel I use my iPhone. The compass helps me maintain a course. As far as sail trim I can feel what the boat is doing. I have learned by the way it sounds and feels what needs to be done, but to get that last 10% you have to see the tell tails which are the streamers attached to the sails and I can’t see them, so I need help there.”

Terry Klarich is an amazing person with a positive attitude. He told me we all need to understand how important encouragement is in life.

“The way I look at it is that I have lived a very blessed life,” he said. “I wanted a sailboat and got one. I have a wood shop. If I had gone the disability way I would have spent my life sitting in an apartment with nothing to do.”

What an awesome attitude! No doubt, when I deliver future talks on attitude, one story I will share will be that of Terry. If you know of someone who could benefit from his positive approach to life, take a minute and forward this to them.

–Charlie Adams is a 1985 graduate of Ole Miss and is a native of Oxford. He is also the author of 4 books on positive attitude and peak performance, including 2013′s “How to Build a Positive Attitude and KEEP the Darn Thing!!” and “Stoke the Fire Within.” His books and motivational keynotes and seminars are designed to make sure events reach their objectives and to help create winning cultures. Email him at:Charlie@stokethefirewithin.com.