Newcomer to the Square and Oxford’s restaurant scene is Tre Amici Italia Ristorante.

Though the restaurant’s doors have only been open since last year, owner Bo Petro of Oxford, says business is booming.

“We’ve had repeat customers so I know the food tastes good,” says Petro “People come for the food, but also I think it’s a different atmosphere than you have at other restaurants on the Square. We wanted to create a place that put out good food, but also provided a laid back atmosphere where you don’t feel like you have to get too dressed up to come in.”

The relaxed ambiance of the restaurant adds to Tre Amici’s charm. With its exposed brick walls and Italian-inspired decor, customers may feel as though they’re taking a brief step off of the Square, and into a rustic trattoria in Italy.

Petro is from Leland, Miss., an area of the Delta known for it’s strong Italian influence. Though the restauranteur is of Lebanese decent, he says that he’s always enjoyed Italian cuisine. Petro is also the assistant general manager at the new Goose Creek Club opening in Oxford soon.

“I grew up eating at places like Lillo’s in Leland, and Fratesi’s in Ridgeland,” says Petro. “I wanted to get a place that was similar to those two in Oxford.” 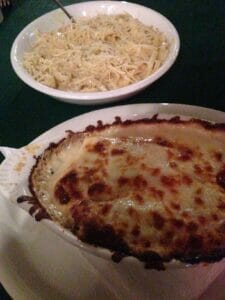 The restaurant’s most popular dishes include Italian classics like fettuccine Alfredo, chicken and eggplant Parmesan, shrimp scampi, and lasagna.

Executive Chef Rick Traylor is the mastermind behind the restaurant’s mouthwatering cuisine.

Before taking charge in the kitchen at Tre Amici, Traylor worked as a chef at Tupelo Country Club, as well as some of Oxford’s finest eateries including Snackbar and Lenora’s.

If you’re not in the mood for pasta or pizza, the menu also offers a few American options such as the Steak Burger made from house ground sirloin and topped with bacon, a fried egg, pesto aioli, fire roasted veggies, jalapeño slices and avocado.

Upon receiving the assignment to cover Tre Amici, I wasn’t quite sure what to expect. I had never eaten there before, and because of it’s novelty, many of my peers had not either.

My expectations were low, however, as soon as I walked through the front door, I was greeted by a hospitable waitstaff who went above and beyond to ensure that I had a quality dining experience.

Being new to the menu, I decided to ask Petro for his recommendation. After little deliberation, I ordered the Chicken and Spinach Stuffed Manicotti, a dish the owner says they have trouble keeping in stock.

As I waited patiently for my meal, I was served a light salad, tossed in house vinaigrette, and bread with a delectable herbed butter spread. Shortly after finishing my third or fifth slice of bread, my dish was brought out.

Folks, it was love at first bite.

The rich taste of the buttery Alfredo sauce combined with the melted whole milk mozzarella cheese was something dreams are made of. The dish created for me a whole new realm of comfort food.

After scarfing down the meal, I was beyond satisfied and content, a feeling that did not change when I saw the price on my bill.

For now, Tre Amici Italia Ristorante is Oxford’s hidden gem, but it won’t be long before it becomes the city’s primary source for quality Italian cuisine.