The Science Cafe at Lusa’s on West Jackson is a chance for everyday people to hear experts break down topical science issues. These informal sessions range from discussions of the “God Particle” to a presentation on deep-diving unmanned vehicles that map the floor of the Gulf of Mexico.

They’re called Autonomous Underwater Vehicles (AUVs) and Arne Diercks was the special guest Nov. 19, explaining his work for a scientific organization called NIUST. The National Institute for Underseas Science and Technology is funded by Ole Miss and Southern Mississippi University. The project uses high-tech submersible vehicles to study, photograph and map the ocean floor at depths as deep as 7,000 feet. 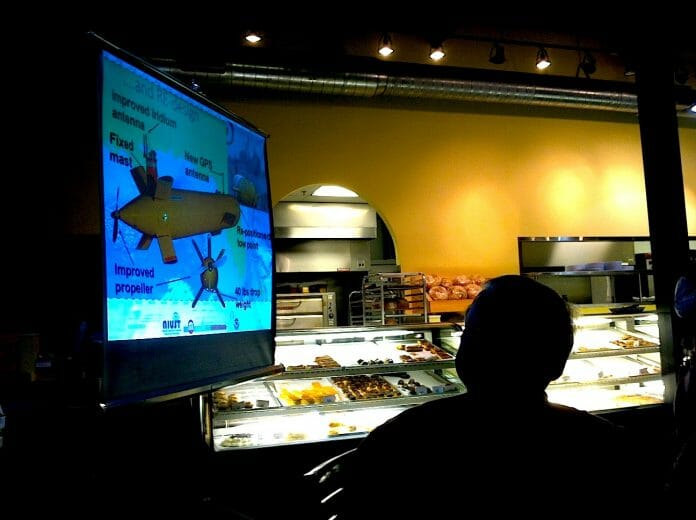 Professor Diercks, who is based near Southern Miss in a research facility, spends much of his time on ships in the Gulf Of Mexico operating two different-sized AUVs. The smaller submersible is called Moula/Moula. “Since the vehicles are completely autonomous, navigating with their own inertial guidance systems, our biggest stress is worrying that we will get them back,” said Dierck’s to the appreciative crowd as they munched on pastries at Lusa’s.

The professor was instrumental in using the AUVs to monitor levels of oil in the Gulf after the Deepwater Horizon Oil Rig spill in which 210 million gallons of crude was pumped into the ocean The team also investigates natural deep-water seepage of hydrocarbons.

The Science Cafe is held the third Tuesday of each month and all are welcome.

Story and photos by Andy Knef, managing editor of HottyToddy.com