John Hailman’s From Midnight to Guntown: A Teller’s Life is Saved 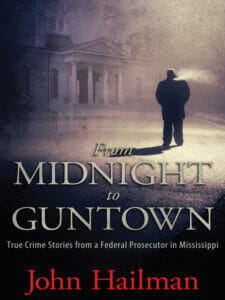 Here is the fifth installment of Midnight to Guntown by John Hailman: A Teller’s Life Is Saved By Robber Incompetence4

On November 12, 1981 two men appeared on a used car lot in Helena, Arkansas, directly across the river bridge from the Mississippi Delta. One was a tall, fair-skinned black male with freckles and a medium afro appearing to be in his late teens. His companion, a darker, heavier man in his mid-20’s, wore a long expensive black leather coat and a fancy homburg hat with the brim turned up, known in the area as a “go-to-hell” hat. The younger man told the salesman he wanted to test-drive a green Ford LTD and would “go by the bank to get some money.” The irony of that statement did not become apparent until later that day. Business being slow, the salesman reluctantly let them take the car, which they drove away in the direction of the bridge to Mississippi. The car bore no license tag at the time. The two men never returned.

At about 9:20 a.m. in nearby Lula, Mississippi, manager Kay Powell and teller Mary Alice Arnold were the only people in the bank. They saw three men drive up in a green Ford LTD and look around in a suspicious way. Two men got out of the car, then got quickly back in and drove around the corner when another car appeared. Mrs. Powell, who had been robbed before and had attended an FBI seminar on how to handle bank robberies, went to the door and called out the car’s tag number to Mrs. Arnold, who wrote it down: Tennessee # AMA 151. How the Tennessee tag got on the car was never explained.

Shortly thereafter, a man entered the bank wearing a black homburg hat and long black leather coat, but no mask. When Mrs. Powell asked if she could help him, he said: “You’re damn right. This is a stickup and you better do what I say if you don’t want to get hurt.” The man held a black revolver in which Mrs. Powell could see the “little round chamber” with bullets in it. A second man, taller, thinner and younger with fair skin, freckles and an afro, entered and held another gun on the two women.  The one in the black leather coat vaulted the teller’s counter, threatening to kill the two women. He slapped Mrs. Powell and told her to “Open the damn drawers.” He struck her again “real hard” when she stepped forward to put the money in a flowered pillow-case he was holding.

The first robber began grabbing money from the teller drawer, which also held the bank’s alarm, a package of bait money with recorded serial numbers, and a dye pack which concealed what appeared to be a packet of $10 bills. The first robber filled his pockets, then stuffed the security pack down the front of his pants and also unwittingly triggered the silent alarm, which went off in the Coahoma Bank directly across the street.  As the second robber escorted Mrs. Powell to the vault, the phone rang next to Mrs. Arnold, who asked the first robber if he wanted her to answer it. “You’re  damn right I do” adding, “If you fuck up, I’m going to kill you.” The caller was a teller from the bank across the street. The first robber placed his gun to the back of Mrs. Arnold’s head and she heard the gun make a metallic click. The caller asked if they had set off their alarm. Mrs. Arnold said, “No,” hung up and told the robber it was a wrong number. When the bait money was pulled it had activated the bank’s surveillance camera facing the teller cages which took a series of remarkably clear pictures of the robbers, neither of whom was masked. A book of the photographs in sequence was introduced at trial.  Fearing prejudice and relying mostly on legal defenses, appointed attorney Arlen Coyle waived a jury trial and asked Judge Keady to sit as judge and jury.  We agreed.

Mrs. Powell and Mrs. Arnold testified that the robbery lasted about 5 minutes and that both had excellent opportunities to observe the robbers at close range and gave accurate descriptions of both robbers. Both positively identified Tony Craft in open court as the first of the two robbers, the one with “high cheekbones” and “mean eyes.” After obtaining $26,242, the robbers made the women lie on the floor and fled. Mrs. Powell looked out the door and saw the same green car driving away about a block down the street when a big cloud of red smoke began to pour out of the car. The first robber got out and fled on foot.

Officers called to the scene included the town marshal, county sheriff, highway patrol and FBI. An airplane and helicopter were called in for the chase. At the place where the first robber exited the car, a loaded .32 H&R revolver was found beside the flowered pillowcase loot bag, as well as $21,798 in cash from the bank. One officer went north toward Tennessee and found the green Ford LTD, whose visible VIN plate identified it as the one stolen from the Arkansas car dealer an hour earlier. The keys were still in the car and the seat belt warning buzzer was still buzzing. Inside were bills stained with red dye, money wrappers marked “United Southern Bank, Lula,” and a surgical glove like that shown on the second robber’s hand in the bank surveillance photos. There were red dye stains all over the abandoned getaway car.

Neighbors told officers that the robber on foot had headed toward a wooded area near Muddy Bayou north of Lula. Chuck Johnson, the son of the town marshal, whose family farmed some 10,000 acres, heard his mother broadcast the information about the getaway route on his C.B. radio and went to an abandoned tenant house near Muddy Bayou and waited inside. Shortly a dark object which Johnson thought was a coyote, common in that area, moved up a cotton row from the bayou. Johnson thought about shooting it, but waited.  When the helicopter flew over, however, the “coyote” raised up and Johnson saw it was a man wearing a homburg hat and a long black leather coat. The man began to run away.  Johnson fired a warning shot from his rifle and the man stopped, raised his hands and said he was not armed. His hands and clothes were covered with red dye stains.

Sheriff Jesse Bonner arrived to arrest the man. After being advised of his rights, the man stated his name was Robert Wilson, but refused to answer further questions.  He did, however, ask for medical attention, pointing to his crotch where the dye pack had exploded.  He was taken back to town to the doctor then photographed and was taken by FBI agent Wayne Tichenor to the bank where he was made to stand outside the drive-in window for viewing. Mrs. Powell immediately made a positive identification, as did Mrs. Arnold.  The defense later claimed these later “show-ups” were unlawfully suggestive.  Judge Keady found them “suggestive, but not unduly so.”  The first robber was identified as Tony Craft of Youngstown, Ohio, who was on federal parole following two prior bank robbery convictions. His brother Mancy “Man” Craft was apprehended a month later in Youngstown. The driver was never identified or appreheded.

At trial Hosia Nixon, owner of a record shop and clothing store in nearby Tunica, positively identified Tony Craft as the man who bought the black homburg hat a few days before the bank robbery. Nixon testified that when Craft bought the hat he was already wearing the same black leather coat in which he was later apprehended. Fay Perkins, a shy, thin young woman, testified that in late October 1981 she rode from Youngstown to Tunica with her cousin Tony Craft in his new gray Lincoln Continental to attend a funeral. Tony went back to Youngstown but returned to Tunica the week of the robbery, this time with his 19-year-old brother Man, who stayed with Miss Perkins and her grandparents in Tunica. The night before the bank robbery Man left the house walking and never returned. Miss Perkins looked at bank surveillance photographs and courageously and unhesitatingly identified her cousins Man and Tony as the robbers.

In a dramatic ending to the prosecution case, an ATF firearms expert testified that the seized H&R .32 revolver was loaded with .32 automatic shells rather than regular .32 caliber ammunition. He concluded that the thinner rim on the automatic shells had caused a misfire, since the firing pin could not strike the bullet’s primer properly and the primer did not ignite to fire the bullet. The firing pin mark on the unfired live shell found in the gun after the robbery was made by that gun.  The metallic clicking heard by Mrs. Arnold, the expert testified, showed conclusively that the robber had tried unsuccessfully to shoot Mrs. Arnold in the head during the robbery. Only the wrong ammunition in the gun had prevented her violent death. We knew this fact before trial but did not tell Mrs. Arnold, who was already scared to death about testifying. At the next recess I told her of her brush with death during the robbery. She was cooler than I expected. “When I heard that click, I thought he had tried to shoot me. It just wasn’t my time, I guess.”

Click on the first, second, third or fourth installment of John Hailman’s From Midnight to Guntown to read.