The new Malco location in the Oxford Commons has already established itself as a new attraction for the Oxford community. With the upcoming additions management plans, it’s clear they are just getting started.

Rodney Barnes, training manager for the new movieplex, has been in the industry for 17 years. He is working hard to get the new theater in full swing. Many people know that the new location will have a bowling alley opening up in spring of next year, but Barnes stated that there’s even more innovative attractions planned for the Oxford Commons as well.

“The Bowling alley will have 26 lanes with a DJ booth in the center, and we’ll have the cosmic bowling setup with the laser lights and smoke,” Barnes said in an interview when Hottytoddy.com attended a movie at the new movie-house.

“We’re also going to have mini golf, bumper cars, laser tag and redemption games,” Barnes added. “We’ll have the boutique lanes for bowling, as well as VIP areas, which are similar to banquet rooms. If you’re having a corporate meeting or a birthday party, you’ll be able to relax on couches by your lanes.”

While all the new attractions slated for Malco might seem targeted toward youngsters, the theater will also have a full bar that will open as soon as Malco receives its liquor license.

“We’re going to try and gear this location more toward the adult crowd with the bar and independently produced films,” Barnes said. “The application for the liquor license is in and we’ll soon be ready to offer patrons a cocktail.”

According to Barnes, this is also the first time that the company has tried having a full bar in a theater. 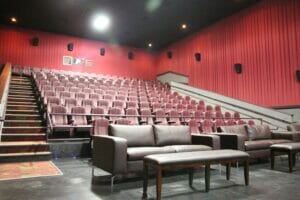 “There’s a second company that used to operate all through Tennessee, Georgia, Louisiana and Mississippi called Premiere Lanes that is also owned by the Malco family,” he said. “We’ve taken the footprint from that premiere entertainment center and merged our own activities into a comprehensive go-to site for the first time in the area.”

The new Malco is pulling out all the stops for this location, including a variety of new, innovative ideas for their customers’ cinema experience.

Malco took notice of latecomers, wary of sitting in the front row of the theatre, and have now placed couches instead of stadium seating in the front rows. For the hearing-impaired, the company offers headphones and closed-captioning devices that can be synced with the individual movie screens. Closed captioning is available in several different languages, as well.

Barnes added that the new location has a gourmet menu and notes that the food is high quality and affordable. 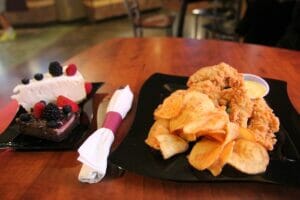 ed really hard to make sure our menu is great, our ingredients are fresh and our support staff strives for perfection,” Barnes said. “If you take a look at our menu, you’ll see our prices are competitive and probably cheaper than many restaurants in town.”

It’s clear that the entire staff at the new Malco movie complex takes pride in the fun atmosphere they generate.  That atmosphere is built on comfort and quick, efficient service. Add in the exciting new attractions slated for next year and you have a dynamic fun spot with the potential to entertain the Oxford community for years to come.

Jared Senseman is the Student Editor at HottyToddy.com. He can be reached at jrsensem@go.olemiss.edu.