Study Looks Into the Eyes of Autism

When diagnosing children with autism, the eyes are an area of focus.

That’s because the tendency to let eyes wander and avoid eye contact is a hallmark of autism spectrum disorder (ASD). And according to recent research, this hallmark may appear earlier in children than previously thought.

In a study published in the journal Nature, researchers used special eye-tracking technology to study infants from age 2 months to 2 years as they interacted with caregivers. Later, they evaluated those same study participants for autism at age 3.

Out of 36 boys included in the final results, 11 of them were later diagnosed with autism. Those 11 boys started paying less attention to people’s eyes between ages 2 and 6 months. In contrast, study participants who were not later diagnosed with autism paid more attention to people’s eyes as they aged, a sign of typical development. 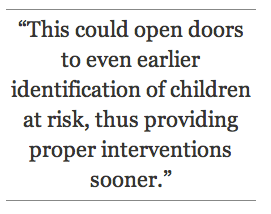 “This is interesting and important research,” says Leslie Markowitz, PsyD, a pediatric psychologist at Cleveland Clinic’s Center for Autism. “Researchers were able to find differences in the gazes of very young children who were later diagnosed with having autism, and they were able to see these over time.”

As promising as the research is, Dr. Markowitz—and the original researchers themselves—stress the need for follow-up studies.

“They will need to replicate their findings with a much larger sample size,” Dr. Markowitz says, “and others will need to conduct similar studies, as well. For example, more females need to be included in future studies because autism can present slightly differently in girls.”

Ultimately, though, such research could offer new diagnostic tools to the field. As of now, many autism therapies start around age 2 because that’s when doctors are able to make a diagnosis. If eye-tracking studies prove effective at identifying younger children with autism, therapies could start sooner—and have a higher chance of success.

“This could open doors to even earlier identification of children at risk, thus providing proper interventions sooner,” Dr. Markowitz says.

For now, though, parents should not attempt to spot such early warning signs on their own. The researchers have access to special eye-tracking technology that goes well beyond what a typical observer can see.

“Parents can be excited that this type of research may help in the future,” Dr. Markowitz says. “But it’s important for them not to extrapolate too much from it, as eye contact and gaze are not used alone in making a diagnosis. If eye tracking does lead to earlier identification, that identification is likely going to take place in a clinical setting.”