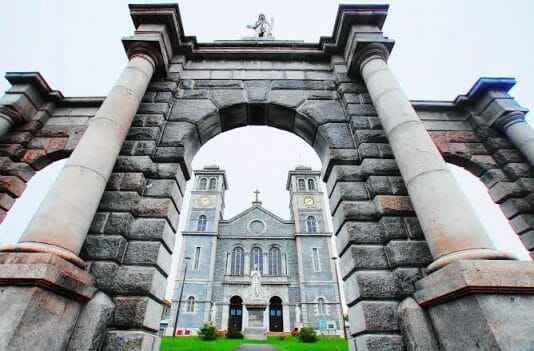 Located in one of the oldest settlements in North America, the Basilica-Cathedral of St. John the Baptist is the mother church and symbol of Roman Catholicism in Newfoundland, Canada.   Built in the form of a Latin cross and in the Lombard Romanesque style of a Roman basilica, the cathedral is constructed of grey limestone and white granite quarried in Galway and Dublin, Ireland, and grey sandstone from St. John’s. Upon its completion in 1855, it was one of the largest church buildings in North America and was the largest Irish cathedral anywhere outside of Ireland.
St. John’s is the capital and largest city in Newfoundland and Labrador, and is considered by many to be the oldest English-founded city in North America.  It is located on the eastern tip of the Avalon Penninsula on the island of Newfoundland, and its name has been attributed to the feast day of John the Baptist, when John Cabot was believed to have sailed into the harbor in 1497.  Newfoundland was claimed as an English colony in the name of Elizabeth I in 1583, temporarily captured by the Dutch in 1665, and attacked three times by the French who captured and destroyed settlements in 1689 and 1707.   St. John’s was retaken by the British each time and re-fortified.  British forces used St. John’s fortifications during the Seven Years’ War in North America, the American Revolutionary War, and the War of 1812.  St. John’s served Allied needs in World War II by providing an air base for the U.S. Army Air Corps and also as a harbor for antisubmarine warfare ships.
The Basilica of St. John’s was designated a National Historic Site of Canada in 1983, recognizing its architectural uniqueness as one of the earliest North America examples of the Romanesque revival style, and its central role as the spiritual and cultural home of Newfoundland Roman Catholics.

Scott Kent, a native Mississippian and Ole Miss graduate, lives in Atlanta where he works for IHG (InterContinental Hotels Group), the world’s largest hotel company. He majored in journalism and business while at Ole Miss and later earned a master’s degree in journalism administration from the University of Memphis. During his career in the hospitality industry, he’s helped launch many of IHG’s newest hotel brands, including Crowne Plaza, Holiday Inn Express, and Hotel Indigo. In addition to traveling across all 50 states, he has worked in more than 50 countries.