Down any highway, epic Delta burgers fit the meanest appetite

CLEVELAND/Highway 61
The Shootout Platter: The old-time favorite
Thirty years ago, when a friend asked for something special, Richard Mun came up with this: two cheeseburgers, open-faced, slathered with chili and homemade slaw. That’ll do, the customer said. It still does. With French fries on the side, it’s the perfect way to refuel after a long day. Pig Pen BBQ, 419 South Davis Avenue, Cleveland 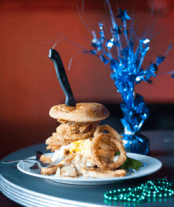 INDIANOLA/Highway 82
The Errythang Burger: no kitchen sink
Onion rings? Bacon? Fried green tomatoes? Throw ’em all on. Chef Trish Berry is beloved for her “redneck gourmet,” and no deep-fried staple is forgotten on this beast. Fried pickles and a fried egg provide the perfect salty oomph. It’s not always on the menu, but if you ask nice. The Blue Biscuit, 501 Second Street, Indianola

YAZOO CITY/Highway 49
The Mount Vernon: The monster
Named for the customer who first requested a “burger with crust,” this massive beef patty is deep-fried and double-dipped. The batter is so thick, you won’t miss the bun. Topped with gravy, fried onions, and an avalanche of fries, it’s a mouthwatering meal of epic proportions. Clancy’s, 680 Center Park Lane, Yazoo City