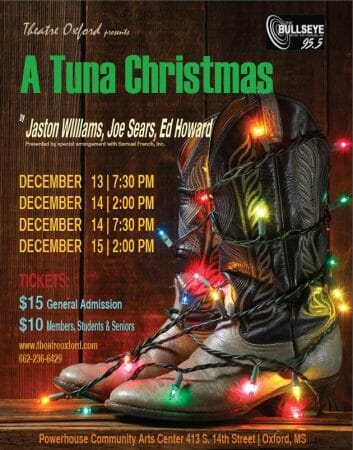 Theatre Oxford will present the holiday comedy A Tuna Christmas live at the Powerhouse Community Arts Center with four performances, December 13 through 14 at 7:30 p.m. and December 14 through 15 at 2 p.m. Tickets, which are $15 ($10 for Theatre Oxford members), can be purchased online at TheatreOxford.com.

“I think folks will enjoy seeing their local friends ham it up, playing roles outside their normal realm,” says Buckley, who plays dual roles: Arles Struvey, a local radio man who is small of stature but big of heart, yet unlucky in love, and Dixie Deberry, an octogenarian who holds a tight rein on the town of Tuna’s finances as career city clerk.

In this sequel to Greater Tuna, it’s Christmas in the third smallest town in Texas. Radio station news personalities Thurston Wheelis and Arles Struvie report on various Yuletide activities, including hot competition in the annual lawn display contest. In other news, voracious Joe Bob Lipsey’s production of A Christmas Carol is jeopardized by unpaid electric bills. Many colorful Tuna denizens join in the holiday fun.

“Tuna Christmas is an irreverent, politically incorrect, comedic look at small town life and how the spirit of Christmas affects everyone,” says Anne Klingen, producer of the show, who also plays the role of Didi Snavely, a chain-smoking used weapons dealer whose motto is “If we can’t kill it, it’s immortal!” Additionally, Klingen plays the role of Inita, an “aspiring career woman” who works alongside her best friend and fellow waitress Helen (played by Dabney) at Tuna’s local diner.

“We hope everyone can make it to the show,” Klingen says. “With cast members playing both male and female roles, this is going to be a rip roaring, side-splitting Christmas event!”