31. Developers’ Dream Springs Forth In The Highlands Development

What were Highland developers John McCurdy and his wife Betsy thinking when they began investing hundreds of thousands of their own dollars in the 1990s on a risky real estate venture they knew would take years to pay off?

As the dynamic entrepreneurs began buying parcels near some natural springs 3 miles from the intersection of Highway 6 and University Avenue, they were sure of only one thing — people love to live on water.

Today the McCurdys can take pride that their dream, the Highlands, has grown from an undeveloped area on Oxford’s outskirts to the go-to housing area for the area’s most influential citizens, including Ole Miss football Coach Hugh Freeze. 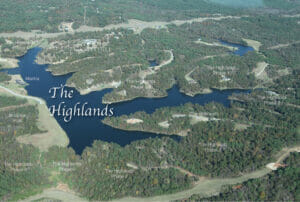 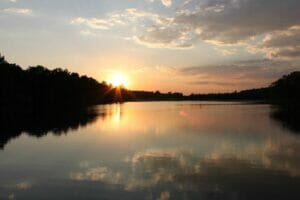 John McCurdy had the foresight to understand that water access, for recreation or subsistence, has always driven America’s growth. The springs that offered so much promise a decade ago now flow into an 85-acre lake, complete with numerous boat docks for pontoons and fishing boats.  The bass fishing is some of the best in the state, with the lake managed for optimum sustainability and residents building homes on lots surrounding the picturesque lake list for $500,000 to millions.

“Betsy and I began buying the area known as The Highlands back in the 1990s,” McCurdy stated in an interview. “We purchased the land in smaller parcels always buying more that joined it until we ended up with the one large parcel we have today. We used the property as recreational property while we thought through the development process.”

Besides Coach Freeze, who can be seen fishing on the lake in the off season in his red and blue Rebel boat emblazoned with ‘Fins Up’ on one side and ‘Win the Day’ on the other, many Oxford notaries call the Highlands home.

One of those is artist Joanne Oliver, whose stunning home reflects her artist’s aesthetic.  “I enjoy the silence of the Highlands,” she said. “You have the hustle and bustle of a rapidly growing metropolis that is outgrowing its infrastructure — then I drive out three miles and all I see is the beauty of nature.

Oliver adds that she appreciates how the developer required setbacks for lots to highlight the natural beauty of the area while allowing for neighborly interaction. “Even though neighbors are near, we have to take the initiative to see each other, so you can enjoy people or just enjoy nature,” she explained. 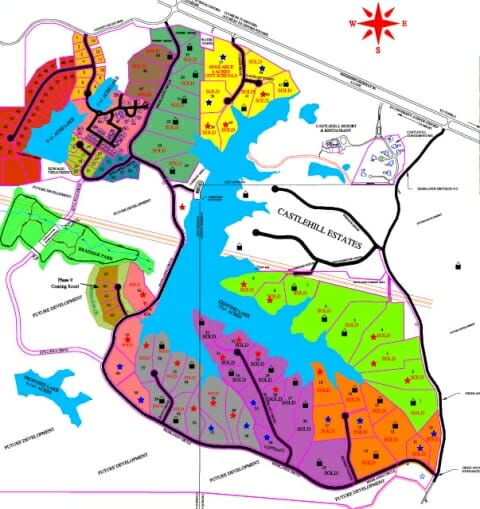 Resident Pat Williams picks up on the closeness of the neighborhood: “I love the camaraderie, the Hotty Toddy spirit in a community where everybody is friendly,” she said.  “We have socials and a great deal of fellowship together. But most of the time, I’m satisfied to sit right here on my back porch and enjoy the awesome lake. I never feel led to go anywhere else.”

Resident Michael Joe Cannon agrees that the beauty of the Highlands balances the often-hectic workday. “It’s such a beautiful place,” Cannon adds. “It makes it hard to go to work and easy to come home. The closeness to town, our neighbors, the lake and solitude, all combine to make this a unique place.”

Another enthusiastic Highlands home owner, Mike Alderson, sums up the residents’ feelings about their neighborhood in one sentence: We are surrounded by loving neighbors, beautiful landscape and trophy bass fishing.”

Larry McAlexander, himself a prominent Oxford real estate developer, believes when it comes to selling Highlands lots, the lake always closes the deal.

But it’s not just the water — it’s what swims in the water that attracts Highlands homeowners. Residents like publisher and avid fisherman, Ed Meek.

“John and Betsy weathered the storm selling lots here when the bottom dropped out of the real estate market.  They created a unique environment with a world-class managed bass lake,” Meek said. “That hooked me and many others. This is a rare property — 13-pound bass are caught. It’s not uncommon for novices like me to catch a boat-load of 8-11 pound bass, and bream as big as two hands.”

With the community still attracting residents, more neighborhood initiatives are on the Highlands horizon development. A park is planned, with new more affordable lots being developed and sold in an asking-price range of $140,000 to $170,000.

“The Highlands will be offering ‘off-lake’ lots on private streets with gated entrances and plenty of ’green space’ to complement and buffer these lots,” McCurdy said. “We plan to market these new lots with homes ranging from 2,500 to 4,000 square feet.”

The McCurdys have built one of Oxford’s top locations to call home, utilizing foresight and natural land formations to develop one of the region’s most beautiful neighborhoods. When the couple was asked how they felt regarding their achievement, they responded:

“We’re just happy that we have been able to provide a community and atmosphere that people want to call home.”

Finally, where does the name ‘Highlands’ come from? The property is located on some of the highest elevations in the state of Mississippi.

The Highlands Lake at a Glance

• The 85-acre lake is professionally managed by Southeastern Pond.

• Seven months later the lake was stocked with 7,000 Largemouth Bass and the next year 700 Catfish were added.

• A consistent water level is maintained year-round by 30 live springs.

For more information onthe Highlands, click on these Web Sites: